The highlights this week: Washington readies for a showdown over Mexico’s power grid, an electric car start-up in Bolivia tries to tap into the country’s lithium reserves, and Brazilian pop star Anitta makes her U.S. record debut.

If you would like to receive Latin America Brief in your inbox every Friday, please sign up here.

In predominantly Christian Latin America, it’s highly unusual that a congressional vote would occur on Easter Sunday. But that’s exactly what Mexican President Andrés Manuel López Obrador has lined up for this weekend. It’s the latest round of jousting over a proposed energy reform so controversial it may lead to the biggest conflict yet between Mexico and the United States under the United States-Mexico-Canada Agreement (USMCA), the trade pact enacted in 2020.

The bill in question would increase the Mexican state-owned electric utility’s control over the nation’s power market from 38 to 54 percent, overriding some existing contracts with private companies.

López Obrador insists he is pushing back against foreigners meddling in Mexico’s affairs and argues that a stronger state electricity company can serve Mexico’s national interest by developing its own green power. But it was private companies’ participation in the grid that made green power take off in Mexico: Since they were allowed more access to the market in a 2013 reform, the capacity for renewable energy generation in Mexico has more than quadrupled, according to data that the Climate Initiative of Mexico’s Luisa Sierra presented at an April 7 webinar hosted by the Wilson Center.

If López Obrador’s reform bill passes, new costs for the government that including compensating private firms for their losses could add up to almost 1 percent of GDP in the year 2022, according to the Mexico City-based Center for Economic and Budgetary Research. In the short term, Mexico would increase its reliance on coal- and natural gas-fired power plants.

For López Obrador’s reform to pass in Sunday’s vote, he needs a two-thirds majority in the Chamber of Deputies, Mexico’s lower house of Congress. The opposition Institutional Revolutionary Party, which had previously not taken a clear position on the law, now says it will reject the bill in the Chamber; if it passes the Chamber, it is expected to then fail in the Senate.

López Obrador, however, has a fail-safe. Mexico’s Congress passed a separate, similar reform law in March 2021, but it was quickly bogged down by litigation—leading the president to introduce this year’s measure. That original 2021 law survived a challenge at Mexico’s top court last week but has yet to be instated.

This 2021 law allows the Mexican state electric company to prioritize buying power from its own plants over those of private companies. But the wording of the judges’ official opinions last week left a margin for future legal challenges, which private companies vowed to unleash. Because some of those businesses are American, U.S. Trade Representative Katherine Tai publicly warned Mexico of a possible challenge under USMCA’s nondiscrimination clauses.

López Obrador has dug in rather than negotiating with U.S. officials, evidently calculating that he can afford to alienate parts of the Mexican and U.S. business class so long as he maintains the support of his most faithful base: poor voters in southern Mexico. Their overwhelming support for López Obrador was visible in an April 10 referendum vote on whether he should finish out his term. Indeed, anti-poverty measures have been a key part of López Obrador’s agenda, with his government in January hiking the country’s minimum wage above the rate of inflation for the fourth consecutive year.

Both the referendum and string of challenges to López Obrador’s energy reform are a snapshot of his strength ahead of gubernatorial elections later this year. While voters in the referendum backed him by over 90 percent, only 18 percent of eligible voters participated, far fewer than the 40 percent needed for the vote to be binding.

As López Obrador prepares for the likelihood of losing the Easter vote, he said this week that he planned to introduce a measure to increase state control of Mexico’s lithium reserves immediately afterward. As a regulatory motion rather than a constitutional amendment, the move would need a simple majority rather than an absolute majority in Congress.

López Obrador remains strong, with a 58 percent approval rating in March. But amid battles over the future of Mexico’s electricity sector and a possible international treaty challenge, he moves closer to defeat on what had been a flagship proposal.

Sunday, May 8: Rodrigo Chaves is sworn in as president of Costa Rica.

Eyes on the prize. After U.S. President Joe Biden banned imports of Russian oil on March 8 in response to Russia’s war in Ukraine, U.S. buyers have looked instead to Latin America. U.S. customs data shows that record volumes of fuel oil from Latin America arrived in the United States in March.

Mexico accounted for 26 percent of U.S. fuel oil imports last month, compared with 18 percent overall in 2021. The Brazilian state oil company Petrobras said refiners on the U.S. Gulf Coast have sought to buy more of its oil, too. Although additional U.S. talks with Venezuela could put Venezuelan oil exports back in play in the United States, the Miami Herald reported Wednesday that the Biden administration is divided over whether to engage further with Nicolás Maduro’s regime.

U.N. scrutiny. Officials at the United Nations made appeals this week for Mexico and Colombia to improve their human rights records.

On Tuesday, Colombian President Iván Duque appeared personally in at the organization’s New York headquarters to testify on progress administering the nation’s 2016 peace agreement with former rebels. The U.N. special envoy on the Colombian peace process said violence against former combatants as well as Indigenous and Afro-Colombian communities in rural Colombia was hindering its full implementation.

Separately, on Wednesday, a representative for the U.N. high commissioner for human rights urged Colombia to prosecute those responsible for a military raid in March that killed 11 people, four of whom were reportedly civilians. Authorities said they were targeting gang members in southern Colombia.

The U.N. Committee on Enforced Disappearances also reported that organized crime and corrupt Mexican officials sometimes played a role in forced disappearances in Mexico, of which there were more than 95,000 on record at the end of November 2021. Only between 2 and 6 percent of the disappearances resulted in prosecutions, the panel reported. 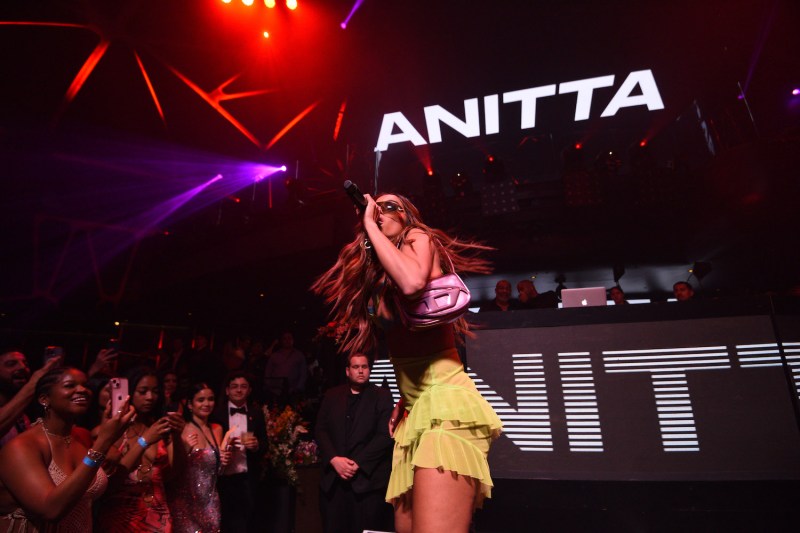 Anitta performs at a Grammy Awards after-party at Hakkasan Nightclub in Las Vegas on April 3.Vivien Killilea/Getty Images for OneOf

Anitta goes global. The Brazilian superstar Anitta released a new album this week, her first with a major U.S. label. She will also perform at Coachella later this month.

Historically, many Brazilian musicians who found success in the U.S. market sang in Portuguese, but Anitta first crossed over to the Latin charts singing in Spanish and now has a string of English-language songs. The new album, Versions of Me, features songs in all three languages and in styles from reggaeton to electropop to funk carioca—the genre where Anitta got her start.

In a profile of Anitta for the New York Times, Carolina Abbott Galvão dives deep into how Anitta’s business savvy helps explain her rise and tells of how Anitta became increasingly political—and critical of Brazilian President Jair Bolsonaro—on her way up. After Bolsonaro’s election, the singer began broadcasting political education classes on her Instagram.

Anitta is so influential in Brazil that when she creates a new dance move, it’s not long before it is seen at concerts and other gatherings. The writer’s room of a Brazilian television series was recently interrupted by such a dance break.

Question of the Week

One major economic fallout of the war in Ukraine for Latin America has been a decline in banana sales. What country exported $700 million in bananas to Russia each year before the war but has since seen diminished sales? 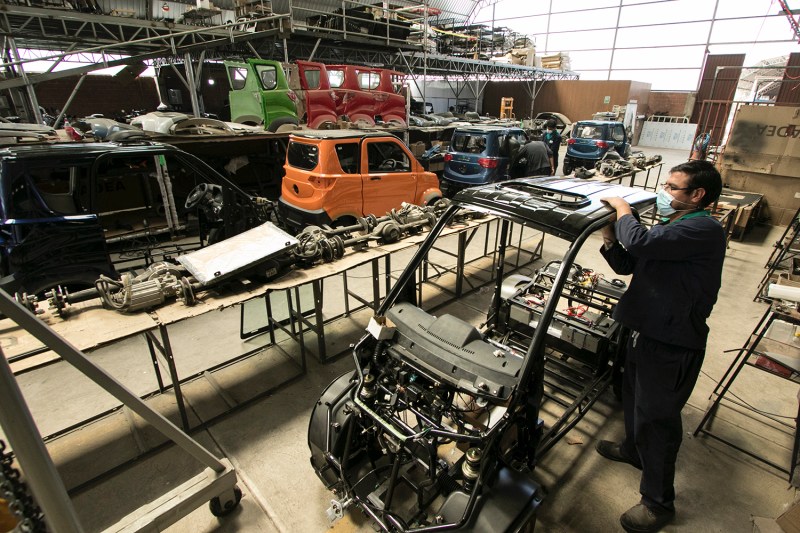 While Bolivian officials have moved slowly on pledges to industrialize the country’s lithium sector by producing homegrown batteries, a Bolivian start-up has managed to put tiny electric vehicles, or EVs, on the road—the first cars of any kind made in the country.

For Rest of World, Thomas Graham looked into how the company Quantum Motors has fared in Bolivia, which is known for its big gas subsidies. The start-up, founded in 2019, sells cars costing around $6,000 that can be charged in a wall socket, as well as electric motorbikes.

Bolivia holds over 24 percent of global lithium reserves, but they remain virtually untapped. The government declared the reserves a strategic resource in 2008 and founded a state lithium company, YLB, to extract and work with the mineral, but regular mining operations are still in their pilot stages.

Quantum’s founders signed a deal with YLB in September 2021 to put Bolivian-produced batteries in their cars and even have a prototype of one. For now, they are mostly using batteries from China. That is set to change soon when YLB moves beyond pilot projects and Quantum begins making 50 Bolivian-sourced batteries per month.

If Bolivia’s lithium sector is to be locally industrialized—rather than based solely on exporting raw materials—more linkages like the YLB-Quantum battery plant project will need to be cultivated. Even more difficult will be making them cost competitive.

Neighboring Argentina and Chile also have plentiful lithium reserves. While there were some murmurs in January about South American countries forming a “lithium OPEC” after Gabriel Boric’s election as Chile’s president, Graham reported separately for World Politics Review that such a prospect is unlikely due to the small sizes and differing structures of the lithium industries in each country.

Instead, countries may try to strengthen regional supply chains surrounding lithium. Mexico, for example—a major car producer—could coordinate with South American countries to purchase their lithium batteries for use in EVs. The energy ministers of Mexico, Bolivia, Chile, and Argentina participated in a virtual forum on Wednesday focused on increasing this kind of potential regional cooperation.