Skip to content
Home
ECONOMIC INDICATORS
Stock Market Watch
AUD/USD is volatile around the Powell speech, but focus is on downside while below 0.7000

Federal Reserve’s Jerome Powell’s hawkish speech has sent a bid on the US dollar and has rocked financial markets with stocks down and bond yields up. Given its high beta status, the Aussie dropped heavily, losing around 35 pips on the knee jerk. At the time of writing, AUD/USD is back trading at 0.699, recovering all of the losses some 15 minutes after the speech hit the wires, but it fell to a low of 0.6951. It is back trading towards the high of the day, 0.7005.

The Fed is dependent on data and Powell said that while the US economy is clearly slowing, he argues that it still has strong underlying momentum. For instance, and crucially, Powell explained that while ”July’s lower inflation readings are ‘welcome’,” they are ”short of what will be needed before we are confident inflation is moving down.”

Markets were looking for clues as to whether the Fed was content with the less inflationary results in the data of late, but the speech from Powell shows no evidence of that. He did say that ”as policy tightens further, it will be fitting to halt the pace of rate rises at some time,” however, that is somewhere over the horizon. Instead, he argues that ”restoring price stability will likely require maintaining a restrictive policy stance for ‘some time.”’ As a consequence, the Fed funds futures are showing odds of a 75bps hike in September now 56.5% vs 46.5% before Powell’s speech.

Meanwhile, the US dollar is consolidating the move around the lows. DXY, an index that measures the greenback vs. a basket of currencies is down 0.6%, losing territories from 108.753, printing a low of 107.588 so far on the day. Should the bears remain in play, AUD should struggle to move much higher and remain pressured below 0.70 the figure. 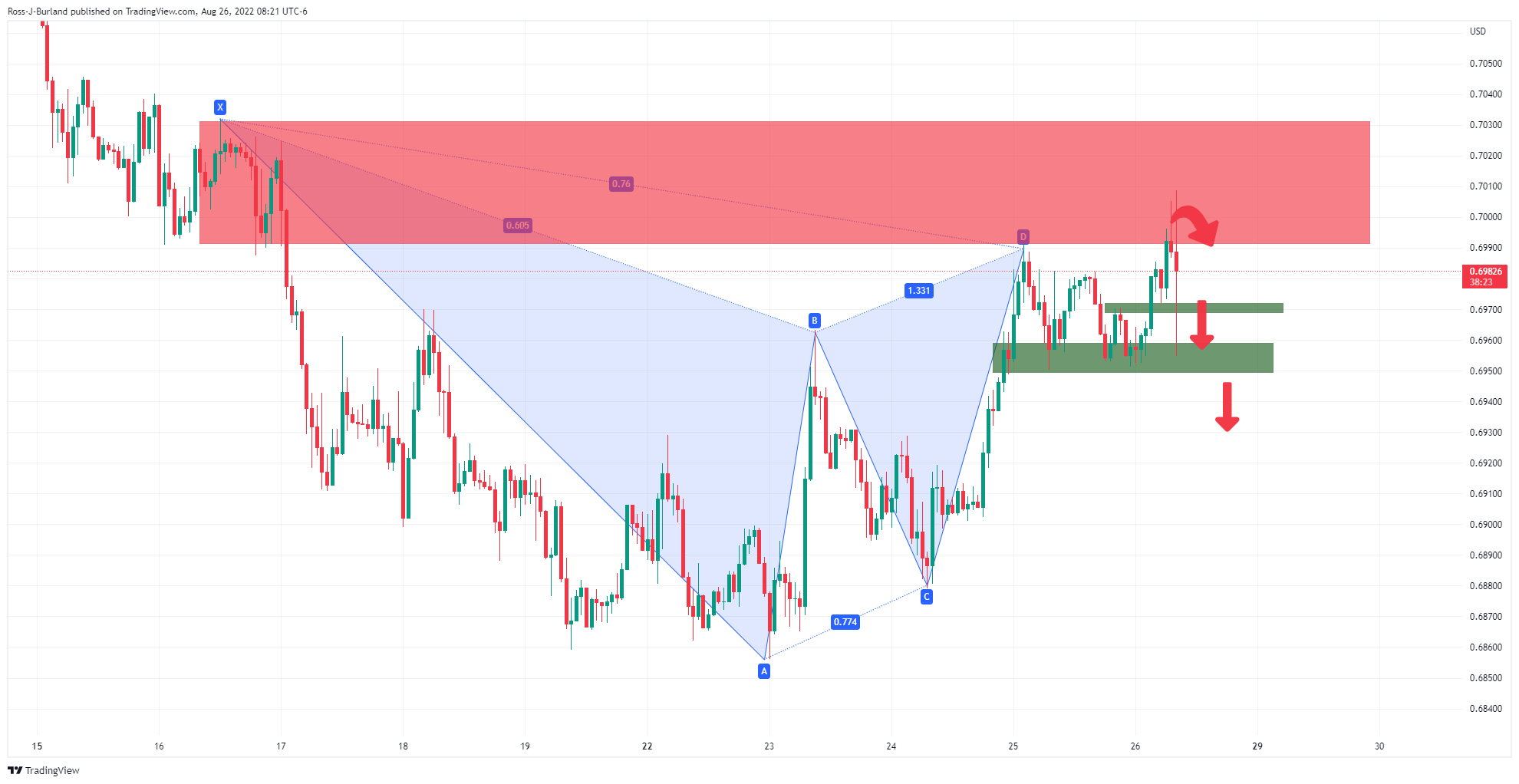 The hourly harmonic pattern is bearish with the price being met by resistance in a supply zone around the 78.6% Fibonacci area of the XA range. Meanwhile, support is seen at 0.6970 guards 0.6950. A waterfall sell-off could be expected below there towards 0.69 the figure.