Bee Vectoring Technologies (BEE.C), a Mississauga, Ontario-based agriculture tech company focused on providing natural precision solutions for the crop protection and fertilizer market, announced today that it had received a patent for its Clonostachys rosea CR-7 strain in Brazil for use as a biological control agent in agriculture.

Brazil is ranked as the world’s four largest food producer and is responsible for 10% of global food production.

The country’s crop protection market was valued at $9.3 billion USD in 2019, tying it with the United States for first place on the world stage.

Industry analysts expect the use of biological products in crop protection and fertilization which is currently estimated at 2.6% of agricultural inputs to grow to approximately 20% by 2025.

The announced patent recognizes unique properties in Bee Vectoring Technologies’ (BVT’s) CR-7 strain and covers the use of CR-7 in any application method, in any formulation (solid or liquid), for yield improvement and for disease control.

Ashish Malik, BVT CEO, commented, “We are making significant advancements in soybean seed treatment in the United States, and extending the work into Brazil is the next logical step in scaling our business. Brazil also represents a great opportunity for BVT to further market a foliar and soil-applied version of CR-7, and we are continuing to evaluate the opportunities for the bee vectoring process despite a more limited commercial pollination services industry compared to the United States.”

BVT has had over 65 patents granted and currently has more than 35 pending in all major agricultural regions worldwide, including North America, South America, Europe, Asia and Australia.

In other news, the company announced it had entered into debt settlement agreements to settle outstanding cash payments owed to certain creditors totaling $360,441 CAD.

As a result of these agreements, BVT has issued an aggregate of 2.12 million common shares at a deemed price of $0.17 per share. These shares are subject to a customary four-month plus one day hold from the date of issuance.

At the beginning of August, the company announced that it had secured its first California sales order with a producer for a major global berry company. The order was for BVT’s proprietary Vectorite with CR-7 biological fungicide and natural precision agriculture system.

Equity.Guru’s own Maddy Grace spoke with Ashish Malik at the end of May and got him to answer five easy questions about the company, its product and how natural precision agriculture solutions are the future of crop production. 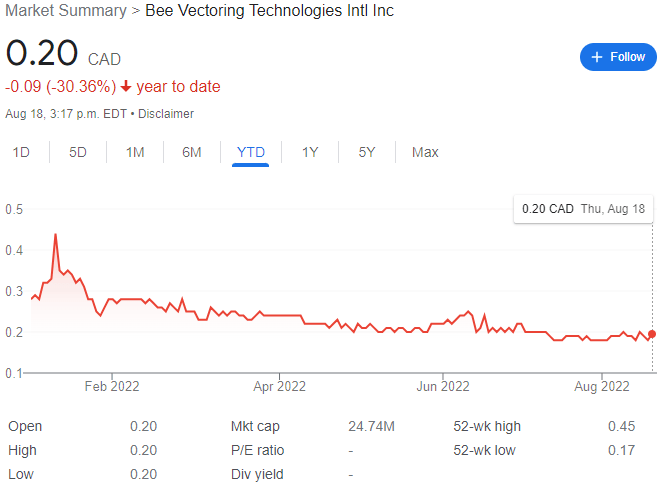