If you would like to receive Africa Brief in your inbox every Wednesday, please sign up here.

European leaders have set a target to end their reliance on Russian oil and gas “well before 2030,” which could lead to new market gains for Nigeria, Angola, Libya, and Algeria on liquified natural gas.

“It seems that Africa now is the most reliable alternative for these countries in Europe,” said Kennedy Chege, a researcher and doctoral candidate at the University of Cape Town, specializing in oil and gas law. “It essentially opens up a great opportunity for African countries to move in and get deals done quickly.”

There is a huge amount of capacity on the continent, but top producers lack the infrastructure that can quickly plug the gap. “The largest challenge is financing,” said Linda Mabhena-Olagunju, managing director at DLO Energy Resources Group, an independent power provider in South Africa. There has not been the incentive for foreign capital investments in African hydrocarbon infrastructure amid a global emphasis on developing renewable energy.

In this context, Nigeria, the continent’s biggest oil producer, is pushing for local investors, such as the African Export-Import Bank, to provide alternative funding sources. The country has the largest known gas reserves in Africa. “We want to build a trans-Saharan gas pipeline to take our gas all the way down to Algeria, to Europe,” said Timipre Sylva, Nigeria’s minister for petroleum resources. But he warned, “There is no spare capacity that we can immediately offtake to Europe.”

Plans for the 2,500-mile trans-Saharan gas pipeline, known as NIGAL, were inked in 2009. It aims to run through northern Nigeria, on to Niger and Algeria, and through to Europe. However, construction was only revived last year due to a dispute between Algiers and Niamey.

Algeria, which currently provides about 11 percent of European gas, is perhaps best positioned to see a boon in exports. Despite the closure of a pipeline to Spain over tensions with Morocco, Algeria’s gas exports to Italy jumped 76 percent last year to 21 billion cubic meters, and it has the capacity for another 10 billion cubic meters in exports. Last month, Italy signaled its intention to further increase those imports from Algeria.

The European Union also announced a financial backing of the Eastern Mediterranean pipeline that will connect the region to gas fields in Egypt, but it has run into geopolitical problems with the United States, which pulled out of the project in January citing a decision to no longer back projects that are not green.

Some of Africa’s biggest production sites are in areas with major security challenges. Mozambique holds the third-largest natural gas reserves in Africa. But ongoing armed conflict in the northern province of Cabo Delgado has delayed $50 billion in gas projects. Libyan gas and oil fields are connected by pipelines to Italy but they suffer frequent blockades.

Insurgency has also affected outputs in the Niger Delta. Nigeria depends on refined petroleum imports to meet its own energy needs. “On the one hand, [the U.N. climate change conference] says we are moving away from hydrocarbon fuels, but the reality of today shows that we are going to need oil and gas production more than ever to meet the current demand,” Mabhena-Olagunju said.

The idea that African gas could immediately replace Russian energy is a misconception, experts told Foreign Policy. For example, Nigeria’s OPEC production quota was raised this month to 1.73 million barrels per day from April, but the country has struggled for months to reach assigned oil outputs and said its immediate focus was on meeting the current quota.

“We have spare capacity of about 600,000 barrels at the moment,” Sylva said, “but it needs investment.” Similarly, Toufik Hakkar, the chief executive of Algeria’s state-owned energy firm Sonatrach, suggested that production will focus on growing domestic market demand and current client obligations.

Still, in the long term, sanctions against Russia create an opportunity for African leaders to rapidly invest in the infrastructure required to supply significant amounts of African gas to European markets.

Wednesday, March 16, to Sunday, March 20: Sierra Leone’s president, Julius Maada Bio, is in Vietnam for an official visit, which began on March 14.

Wednesday, March 16, to Thursday, March 17: The African Union’s Peace and Security Council holds a forum, which began on March 15 in Accra, Ghana, to discuss recent unconstitutional regime changes in Africa. 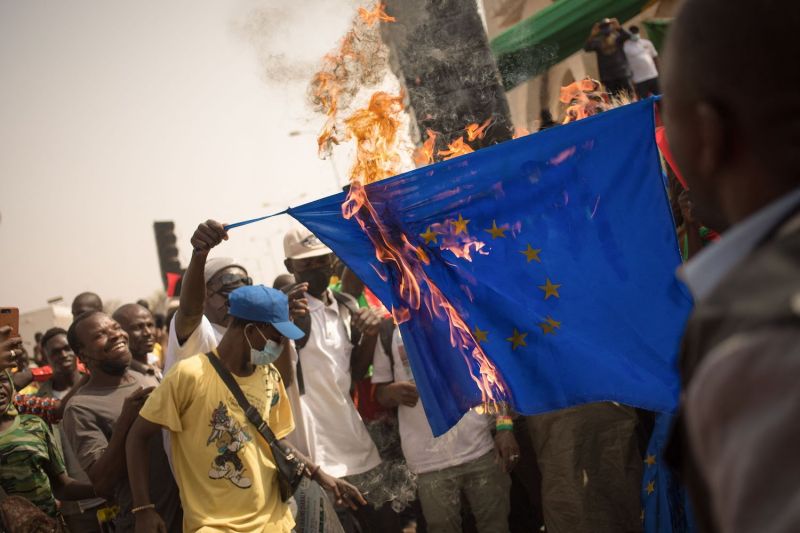 Protesters burn a European Union flag during a demonstration organized by the pan-Africanist platform Yerewolo to celebrate France’s announcement to withdraw French troops from Mali in Bamako, Mali, on Feb. 19.FLORENT VERGNES/AFP via Getty Images

CFA value plunge. The dollar is rising against the CFA franc, which is used in 12 African countries and is pegged at a fixed rate to the euro. The euro, in turn, is losing value due to Europe’s close trade links with Russia and Western sanctions against Moscow.

Since measures to cut Russia off from the world’s financial systems were announced, the exchange rate has risen from 580 CFA, two days before Russia’s Feb. 24 invasion of Ukraine, to 600 against the dollar, its highest levels since November 2021. On March 7, it reached 604, the same day the euro plunged significantly. This will have implications on the cost of living in some Francophone countries, particularly taking into account the rising price of fuel imports.

Amid anti-French sentiment in West Africa, French President Emmanuel Macron and Ivorian President Alassane Ouattara announced a plan to rename the CFA the “Eco” in 2027. The CFA franc was invented by France in 1945 and is seen by many as a post-colonial monetary tool that benefits France at Africans’ expense, as Mohamed Keita and Alex Gladstein wrote in Foreign Policy last year.

Eight countries in West Africa using the currency are no longer obligated to deposit half of their foreign exchange reserves into the French treasury. The changes ratified in 2020 did not apply to other African countries.

Chad peace talks. Chad’s military government and opposition groups started peace talks on Sunday in Qatar as a first step toward a planned “national dialogue” due to begin on May 10 to end years of fighting.

Chad has been locked in conflict for three decades with armed groups opposing the rule of late dictator Idriss Déby, who came to power as the head of a rebel force in 1990. Déby, who violently cracked down on dissent during his rule, died in battle against rebels last April. His son Mahamat Déby took over the country after his death, fronting a 15-member military junta and vowing to hold free elections. But opposition groups said the junta had to show more signs that it was sincere about holding democratic elections and releasing political prisoners.

Waning foreign influence. Guinea’s ruling military is reviewing developments at the Simandou iron ore deposit owned by British-Australian mining group Rio Tinto and a Chinese-backed consortium. Interim Guinean President Mamady Doumbouya, who took power in a September 2021 coup, said his administration was seeking clarification of how Guinea’s interests will be preserved and has suspended all activities on the project.

Guinea’s government wants any developer of the mine to build a railway spanning the country, whereas developers had planned for a shorter route accessing a rail line and port in Liberia. Simandou, in Guinea’s southeast, holds more than 2 billion metric tons of high-grade ore, but the project had been postponed for years because of disputes over ownership rights and transportation infrastructure costs.

This Week in Culture

Mali’s prized manuscripts are digitized. A digital gallery to showcase Mali’s cultural history has been launched, featuring more than 40,000 of Timbuktu’s ancient manuscripts, some dating back to the 12th century.

Mali Magic, a collaboration among Google Arts & Culture and a number of local and international organizations, allows users to read thousands of documents—for example, on how human rights and slavery were perceived by West Africans in the 17th century or the Islamic world’s understanding of geography and astronomy.

The city of Timbuktu was once an economic hub for trade on the continent and a center of learning. During a 10-month occupation in 2012, Timbuktu was taken over by rebel groups, where thousands of priceless ancient manuscripts came under threat and more than 4,000 were either burned or stolen by jihadis.

Malian librarians and their assistants secretly transported hundreds of thousands of volumes into family homes in a bid to save them from destruction. Through those efforts, some 350,000 manuscripts from 45 libraries across the city have been kept safe. The manuscripts on the online platform were originally written in medieval Arabic but have been translated to several languages, including English, to make them globally accessible.

Benin Bronzes to return home. The U.S. Smithsonian Institution has agreed to return some of its collection of 39 Benin Bronzes, originally looted from the palace of Benin City, southern Nigeria, in 1897 by British soldiers. “Officials will make a determination on the remaining artifacts once they have verified if they were stolen,” the Smithsonian said. The return comes after a decadeslong fight for restitution by the Nigerian government, which officially began in 1970.

Chart of the Week

As Europe’s third-largest gas supplier, Algeria could stand to benefit if it can increase its output, a substantial challenge for most suppliers, who are already producing as much gas as they can.

Proxy forces. A deep-dive by the Intercept reveals the United States Africa Command continued a partnership with Cameroonian counterterrorism operatives for months despite acknowledging atrocities committed by the unit and that operations had yielded “no strategic value.”

Until late 2019, members of the unit—known as the Rapid Intervention Battalion—conducted missions against Boko Haram and the Islamic State West Africa Province, but rights organizations reported multiple incidents of human rights abuses, including the “cold-blooded execution” of women and children.

Electoral reform. Last month, Nigerian President Muhammadu Buhari approved an amendment to the country’s electoral law aimed at safeguarding a more transparent voting system as the country heads to the polls next year. Changes include the electronic transmission of election results and electronic voter accreditation.

The new act is a significant feat in Nigeria’s electoral system, writes Michael Asikabulu in Daily Maverick, because it will help prevent fraud and the manipulation of results, a win for Africa’s largest democracy.