UPDATE: Chicken Soup for the Soul stock is down 12.4% to $12.42 in the first hour of Friday’s session. This is actually worse than the premarket where shares fell closer to the 10% range. The sell-off comes after CSSE produced a larger than expected Q2 earnings loss on Thursday post-market. The selling is likely also a consequence of Redbox shareholders who held too long until the merger went through and now do not want to hold onto CSSE shares. Shares have drifted as low as $11.25 and as high as $13.48. $15 puts expiring August 19 have risen 43% to $3 this morning.

Chicken Soup for the Soul (CSSE) stock is down 10.4% in Friday’s premarket a day after it reported second quarter earnings that wildly missed forecasts. The media company, known mostly for the eponymous suite of uplifting books owned by its parent company, produces a number video on demand channels including Crackle and Popcornflix.

CSSE reported a GAAP loss of $-1.39 per share, which was 67 cents lower than expectations. Revenue was the one bright spot at $37.6 million, which was $8.4 million ahead of expectations and up 70% YoY.

Earnings came out just as meme traders were basking in the warmth of the company’s completed acquisition of Redbox (RDBX). That acquisition, which gave Redbox shareholders 0.087 shares of CSSE for each RDBX share, sent Chicken Soup stock up about 30% on Wednesday. Thursday, however, had the media company giving back 4.9% in short order.

CEO William Rouhana was enthusiastic during the earnings call, saying that besides the Redbox acquisition the core company platforms were growing faster than expected. Despite the earnings miss, adjusted EBITDA grew 77% YoY to $5.6 million.

“Our advertising sales engine is delivering results both for our owned and operated group of networks and our growing roster of ad rep partners,” Rouhana said. “The ability to do so is a function of everything we’ve done to scale our business over the last couple of years. Our viewership is growing as we continue to roll out new distribution touchpoints, we’ve reached a total of 110 pre-Redbox. And these viewers are responding to our new tech platform as measured by increasing time spent on our services, and we are releasing original and exclusive content at a faster clip that’s fueled by our robust production pipeline and our large library.”

Rouhana said that 22% of the company’s ad impressions during the second quarter came from original content. The company is also selling advertising for other Advertising Video On Demand (AVOD) companies, increasing those customers from six to 12 in the past year.

Rouhana also addressed the Redbox acquisition: “Chicken Soup for the Soul Entertainment and Redbox are a truly unique fit. The combination creates a fully formed entertainment asset for the streaming era that we don’t think you can find anywhere else. The asset includes a large content library, our significant IP ownership, a valuable original production pipeline, a fully developed ad sales engine marketing machine with expanded ad inventory, and streaming assets that include our AVOD networks, Redbox’s TVOD, PVOD and free live TV channels, along with their cash-generating kiosk network.”

Management said they were working on a Redbox streaming app that will become a major source of revenue in coming quarters. They reiterated guidance that the full year will produce $500 million in revenue, when including five months of Redbox sales, and a total of $100 million in earnings before interest and taxes.

The news from the Redbox acquisition briefly took CSSE stock up to $15.89 on Wednesday. This is significant in that it took out both the range high near $13.50 from April 4 and the resistance ledge surrounding $15 from December 2021. This price action represents the promise that CSSE will be able to pull back above this point sometime in the near future despite the fact that it has already lost its footing.

With CSSE stock trending below $14 in Friday’s premarket, there is some possibility that CSSE discovers support at that April 4 and 5 range high between $13 and $13.52. The good news is that the 50-day moving average has crossed over the 100-day, a momentous event that spells more upside in Chicken Soup’s future. That crossover point around $8.30 may also become a point of support.

At present the Relative Strength Index (RSI) eclipsed 80 mid-week and is looking to drift downward to less overbought readings. This means that price action should also search for support and drift sideways in consolidation for a time. 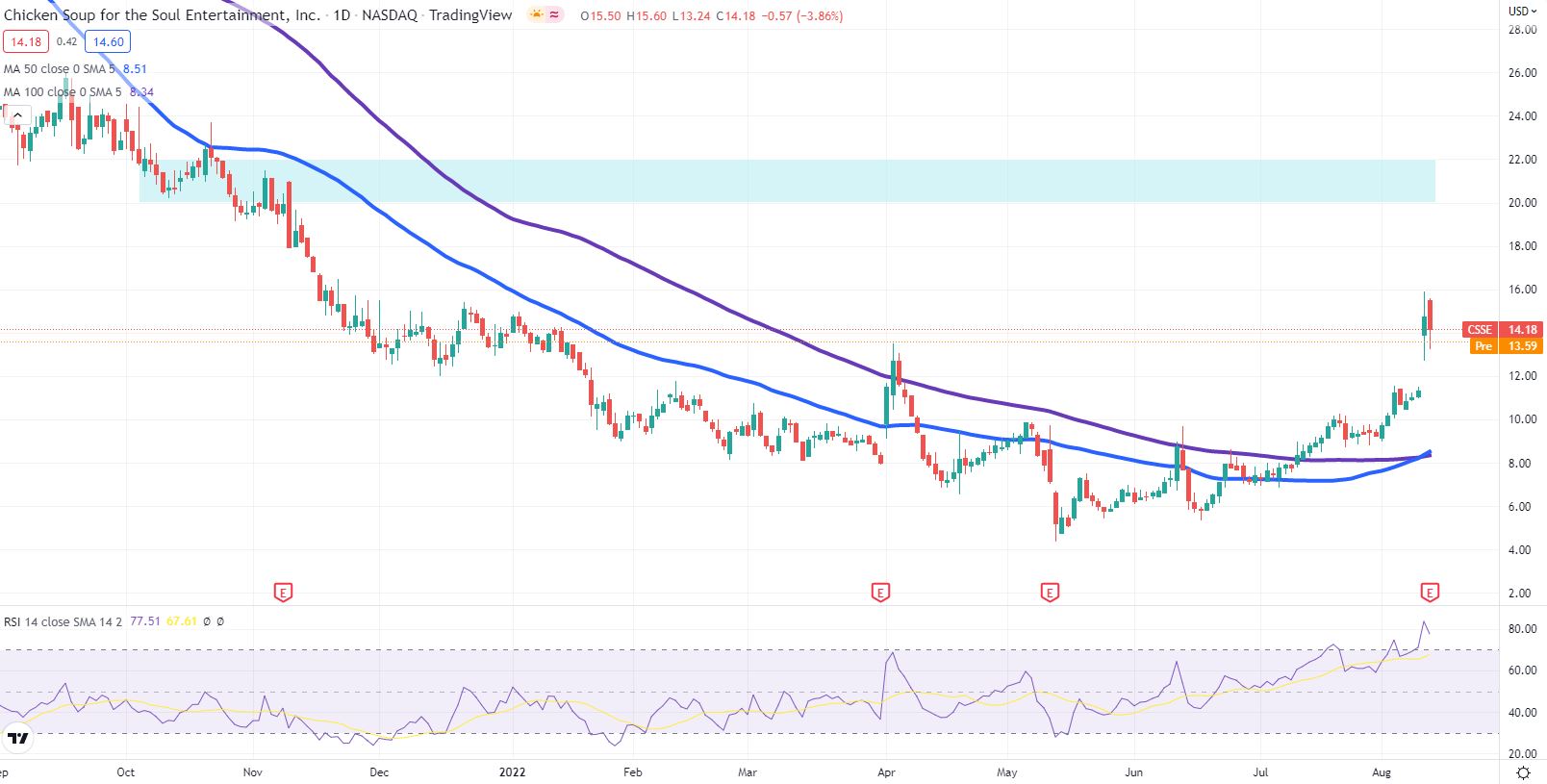