Graphene Manufacturing Group. (GMG.V) announced today that it has commissioned the Company’s graphene aluminum-ion (G+AI) batteries in the pouch cell format, as well as manufactured the first G+AI battery pouch cells. Additionally, Graphene announced that it has commenced operations at its Battery Development Center (BDC), enabling the Company to produce its batteries for a wide variety of applications.

“Having our own fully equipped and staffed Battery Development Centre will further enhance our ability to co-innovate with partners that continue to express strong interest in the initial performance results and future potential of G+AI Batteries,” commented GMG’s Managing Director and CEO, Craig Nicol.

In case you’re out of the loop when it comes to Graphene, let’s first talk about the Company’s G+AI battery. On April 22, 2021, Graphene announced the execution of a research agreement with The University of Queensland Research and Uni Quest. According to this agreement, the parties would collaborate to develop G+AI batteries, including commercial battery prototypes for:

As for the battery itself, testing to date has demonstrated that the G+AI battery possesses superior energy and power densities when compared to leading marketplace lithium-ion battery technology. To be more specific, according to Graphene, the Company’s battery has a battery life up to 3 times longer than current lithium-ion batteries and charges up to 70 times faster.

Arguably one of the more attractive points of the G+AI battery is that it does not rely on rare earth metals for production. Speaking of which, lithium is a hot commodity, currently priced at ¥477,500 per tonne, or about USD$71,111 per tonne. With this in mind, the price of lithium has surged roughly 436% in the last year.

Following Beijing’s call for lithium smelters to increase output, the price of lithium reached a record-high of ¥497,500 in March 2022. With global lithium reserves estimated at more than 14 million tonnes, we aren’t going to run out of lithium anytime soon. However, if the global supply cannot meet demand, the price of lithium-ion batteries will naturally increase.

At the time, lithium-ion battery packs cost as much as $1,200 per kilowatt-hour. Regardless, Graphene has opted to omit lithium from its batteries entirely. Instead, the Company has substituted lithium for, you guessed it, graphene. According to Graphene, the Company has developed a high-quality, low-cost, scalable, tuneable, and low to no contaminant graphene. 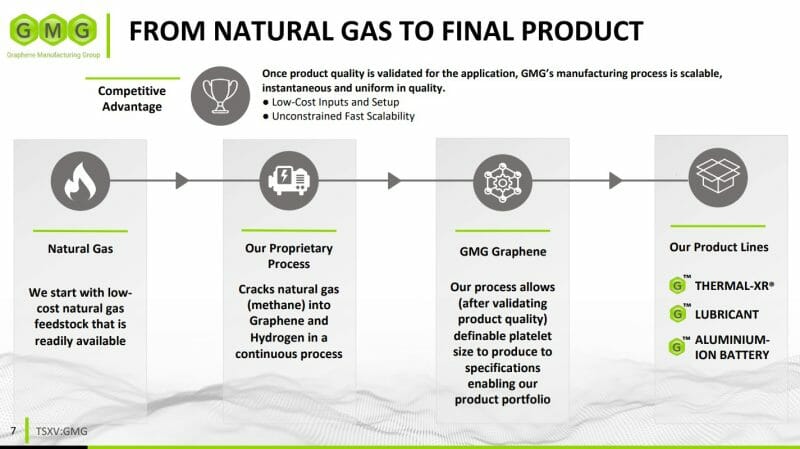 Unlike traditional methods of graphene production which rely on mined graphite, Graphene utilizes its proprietary process to convert natural gas into hydrogen and graphene. Referring back to Graphene’s latest news, the Company has commissioned and manufactured the first G+AI battery pouch cells. For context, pouch battery packs are quite literally batteries packed in pouches.

“Much of the interest from prospective customers lies in our ability to productize the pouch cell, which can be found in a large range of end products ranging from personal and industrial appliances to grid batteries and EVs,” said Craig Nicol.

As opposed to traditional metallic cylinders, batteries are instead stored in conductive foil tabs that are sealed and stored in a pouch. Compared to other forms of battery packaging, pouch battery packs are able to achieve up to 95% packaging efficiency, outpacing all other forms of battery designs. Looking forward, Graphene intends to commence commercial manufacturing of its coin cell G+AI batteries.

Similar to its latest announcement, on December 9, 2021, Graphene announced that the first G+AI batteries in coin cell format had been manufactured. Unlike pouch battery backs, coin cell batteries are stored in small, circular, stainless steel discs that are commonly used to power devices like watches and computer components.

With this in mind, subject to successful commercial prototypes and a final investment decision, Graphene plans to construct an initial commercial coin cell G+AI battery manufacturing facility. Once completed, the Company intends to commence the first production and sales of G+AI batteries. The development of Graphene’s G+AI batteries in pouch cell format will occur in parallel.

The Article was originally posted on Equity.guru