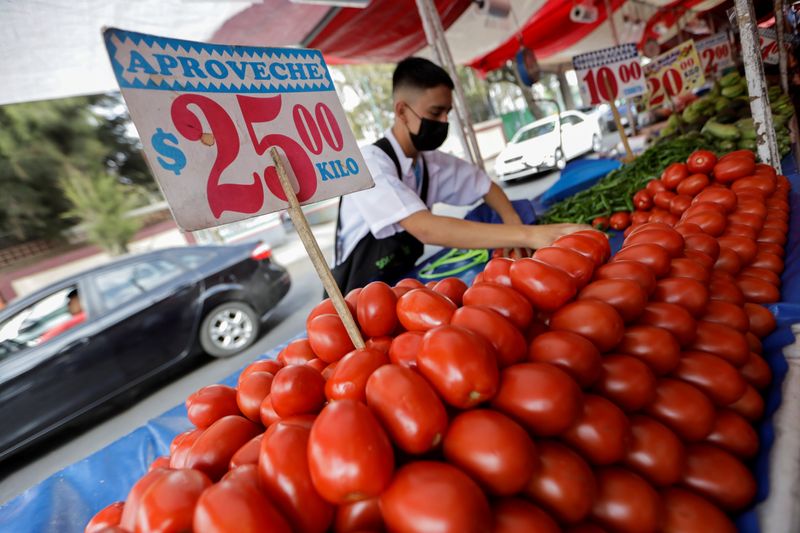 MEXICO CITY (Reuters) – Mexican annual inflation likely accelerated in the first half of February after slowing during the past eight weeks, a Reuters poll showed Monday, reinforcing expectations that the country’s central bank would continue raising rates in line with the U.S. Federal Reserve.

The consensus forecast of 12 analysts surveyed was for inflation to grow to 7.17% from 7.01% in late January. If the prediction is correct, it would be the first increase since late November, when inflation hit a 20-year high.

The core rate of inflation, which strips out some volatile food and energy items, was seen accelerating to 6.46%, which would be the highest rate since August 2001.

The Bank of Mexico targets inflation of 3%, with a one percentage point tolerance range above and below that. Earlier this month the bank raised its benchmark interest rate for the sixth consecutive time, citing inflation.

Its next monetary policy decision is scheduled for March 24, a week after the United States’ Federal Reserve is expected to raise interest rates after years of sitting near zero.

Compared to the previous month, Mexican consumer prices are estimated to have increased by 0.40% in the first half of February with the core price index seen advancing 0.35%.

Disclaimer: Fusion Media would like to remind you that the data contained in this website is not necessarily real-time nor accurate. All CFDs (stocks, indexes, futures) and Forex prices are not provided by exchanges but rather by market makers, and so prices may not be accurate and may differ from the actual market price, meaning prices are indicative and not appropriate for trading purposes. Therefore Fusion Media doesn`t bear any responsibility for any trading losses you might incur as a result of using this data.

Fusion Media or anyone involved with Fusion Media will not accept any liability for loss or damage as a result of reliance on the information including data, quotes, charts and buy/sell signals contained within this website. Please be fully informed regarding the risks and costs associated with trading the financial markets, it is one of the riskiest investment forms possible.