NASDAQ:MULN defied the broader markets for a second straight day as the EV startup closed out August on a strong note. On Wednesday, shares of MULN gained a further 4.96% and closed the final trading session of the month at a price of $0.67. Stocks extended their recent losing streak as Wall Street finished August with monthly losses and four straight consecutive red days. All three major indices closed lower yet again as further comments from the Fed suggested their hawkish stance on interest rates will remain into 2023. Overall, the Dow Jones lost 280 basis points, the S&P 500 dropped by 0.78%, and the NASDAQ fell by 0.56% during the session.

Stay up to speed with hot stocks’ news!

The major headline in the EV sector on Wednesday was that Toyota is committing $5.6 billion USD to battery output in both the US and Japan. Battery production will begin between 2024 and 2026, and will have an initial capacity of over 500,000 electric vehicles. Toyota was long criticized for lagging the EV market but the global automotive leader has made great strides recently to catch up to the rest of the sector. 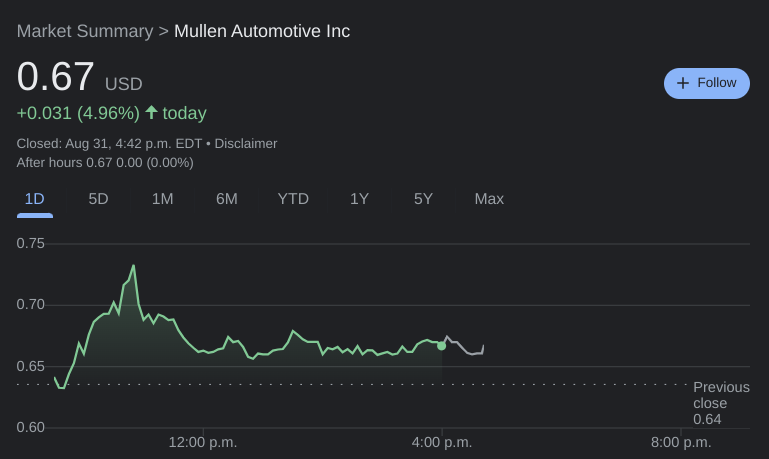 Following Toyota’s announcement we saw industry leader Tesla (NASDAQ:TSLA) drop lower yet again. Shares of TSLA fell a further 0.75% and has lost nearly 10% over the past couple of weeks since the 3 for 1 stock split. Other EV stocks making moves included both Rivian (NASDAQ:RIVN) and Lucid (NASDAQ:LCID) which rose by 2.57% and 1.25% respectively during the session. Nio (NYSE:NIO) also edged higher ahead of the August delivery report for Chinese EV makers on Thursday.

Like this article? Help us with some feedback by answering this survey: