Prismo Metals (PRIZ.C), a Canadian-based junior focused on the acquisition and exploration of mineral property assets in Mexico, announced today that it had commenced its 2,000-metre drill program at its Palos Verdes property in Sinaloa, Mexico.

Palos Verdes is located approximately 65 kilometres northeast of Mazatlan and is contiguous to the Panuco silver-gold project of Vizsla Silver.

The intermediate stage property is comprised of the Palos Verdes concession which spans approximately 22.77 hectares.

Limited historical sampling carried out by ProDeMin returned results up to 4.15 g/t Au and 732.7 g/t Ag.

Prismo’s announced drill campaign is expected to last approximately two months. The program is geared to test the Palos Verdes vein and structural intersection with a second vein at depths where it is believed that potential for a large ore shoot is present.

MW drilling has been contracted to carry out Prismo’s 2,000-metre program.

Dr. Craig Gibson, president and CEO of Prismo, commented, “We are pleased to be able to conduct our program to drill holes to intersect the Palos Verdes vein at significantly deeper levels than in the previous drilling campaigns. We will be able to test the vein several hundred metres underneath the surface exposures with the first hole being under way.”

In other news the company announced that it intended to complete a non-brokered private placement soon with the issuance of 750,000 common shares at a price of $0.20 CAD per share for gross proceeds of $150,000.

Prismo’s second property, Los Pavitos, is located in the Alamos region of Sonora State, Mexico. The early-stage project consists of one concession and covers 5,289 hectares.

Historic samples from the Santa Cruz area of Los Pavitos yielded as much as 398 g/t Ag for a one-metre sample as well as 8.3 g/t Au and 62 g/t Ag for a 0.25 metre channel sample.

The company is currently working to determine whether mineralization is related to an orogenic gold deposit related to a southerly extension of the Caborca Orogenic Gold Belt of northeast Sonora.

Back in May, Prismo announced that it had received results from its sampling program. Individual samples from the Las Auras and Santa Cruz areas returned up to 10.15 and 28 g/t gold respectively.

Mexico has a rich and long history of mineral extraction, dating back to early Mesoamerican cultures and continues to be a prolific region for exploration.

Equity.Guru’s own Chris Parry breaks down Prismo’s potential as an investment opportunity in this recent Three Minute Hits Video: 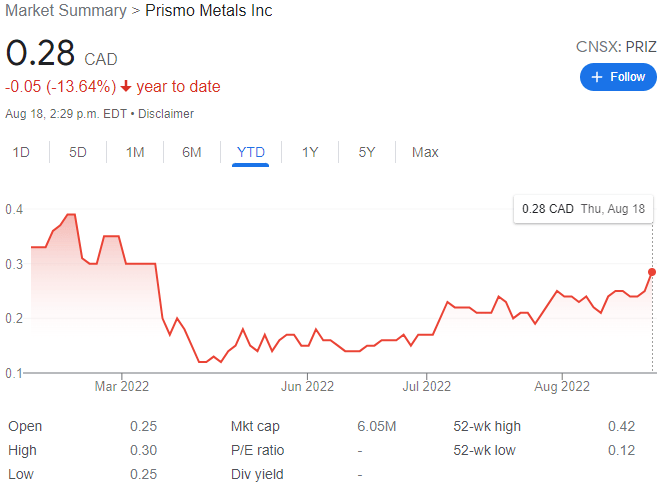