The company reported $3.6 million USD of adjusted funds flow from operation during the quarter with net earnings of $2.8 million, compared to $3.1 million recorded for the same period in 2021. The previous earnings report included a one-time gain of $4.5 million on debt retirement.

Southern produced an average 14,169 Mcfe/d (thousand cubic feet equivalent per day), which included only a partial month of June from the three new Gwinville wells, an increase of 14% from the same period in 2021.

During the quarter, Southern completed a bought-deal prospectus, raising aggregate gross proceeds of $31 million, leaving the producer with approximately $33.2 million of cash as of July 31, 2022.

The company also initiated planning and procurement for a multi-well program to follow up on the successful appraisal program at Gwinville.

Ian Atkinson, president and CEO of Southern, commented, “We are pleased with the success of our recent equity financing, which allows us to accelerate the organic growth strategy portion of our goal to reach 25,000 boe/d. The success of these first three wells at Gwinville have already increased our corporate production by over 100 per cent. We are truly excited by our ability to begin a long-term development drilling program to unlock shareholder value due to the significant reserves, production and cash flow growth in Gwinville and our other assets. Cash flow generated from this development will support our fundamental strategy of both organic and inorganic growth of natural gas weighted assets in the Gulf Coast area of the United States.”

Based on the successful initial three-well program at Gwinville, the board of directors have approved an accelerated capital budget of $34.4 million for the remainder of 2022. This will allow the company to carry out a long-term drilling program beginning in Q4 2022 in the Gwinville field.

The approved drilling program will target multizone horizontal potential in the Upper Selma, Lower Selma and City Bank formations with a further five horizontal wells, as well as pad construction, in-field pipelines and water disposal well conversions that will help service the next few years of Gwinville development.

Southern secured the equipment and major services necessary to begin the next phase of drilling at Gwinville in Q4 2022. 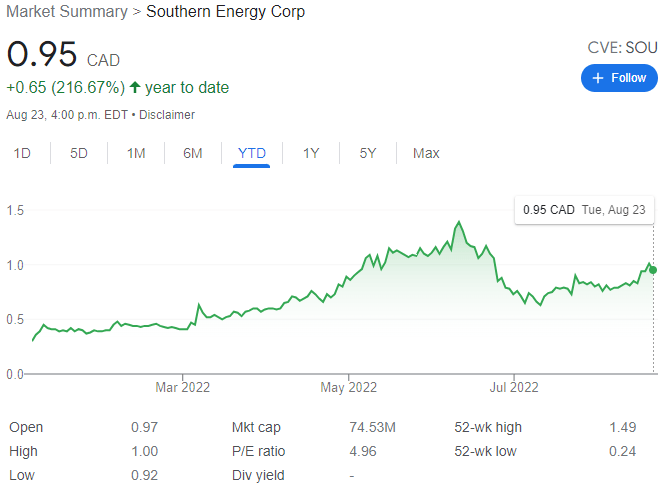