Update: Tesla Inc. tracked the weakness in broader Wall Street indices and shredded 1.14% at the start of the week on Monday, settling at $284.82. Shares of the Electric Vehicle (EV) giant failed to sustain the recovery near $287.50 once again, fuelling a fresh sell-off. The sentiment on major Wall Street indices remained weak amid concerns over the Fed’s resolve to maintain a restrictive policy to fight inflation. Adding to the concerns, China battles economic slowdown concerns amid covid flare-ups and the energy crisis, which exerted downside pressure on the stock price. However, the main reason behind the pullback could be the National Labor Relations Board ruling out Monday, citing that Tesla violated workers’ rights when it told employees they couldn’t wear shirts with pro-union insignia at the factory.

Tesla (TSLA) stock fell on Friday in line with the broad equity market sell-off. Jay Powell turned extra hawkish on equities and did the job of taking out any remaining bulls. Tesla with its larger retail following was always likely to be a holdout, so it proved on Friday with it outperforming a stumbling Nasdaq. The index lost 4%, while Tesla only sold off less than 3%. This may have had something to do wit the 3:1 stock split, which always appeals to human emotions.

The more negative read-through is the continued slide into the close for all equities and Tesla. The stock opened at $297.40 and even staged a brief rally but was quickly rejected. From there it was one-way traffic to the sell side with Tesla closing at more or less the low of the day. This usually leads to follow on selling in the next session. Tesla is down over 2% in Monday’s premarket, so it looks like this particular trend is holding for now. The inflation reduction act may have given a kicker to green energy and EV stocks, but despite this we see too many headwinds in the form of a general market sell-off.

First, the downtrend remains in place. We now have a flag formation between $315 and $281. A break lower targets $240 and a break higher targets $350. Currently, Tesla is in neutral as it searches for direction around the 200-day moving average. We feel the downside has a higher probability due to the bearish divergence from the Relative Strength Index (RSI) last week and the now the negative backdrop for equities. However, we need a move lower from here to confirm this, so we would look for a break of $281 to confirm. This confirms the double top at $314 and the bearish divergence we got from the second top at $314. That would then target the lower end of the range with some volume profile support at $240 to $220 before an obvious test of $200 if Tesla continues to move lower. 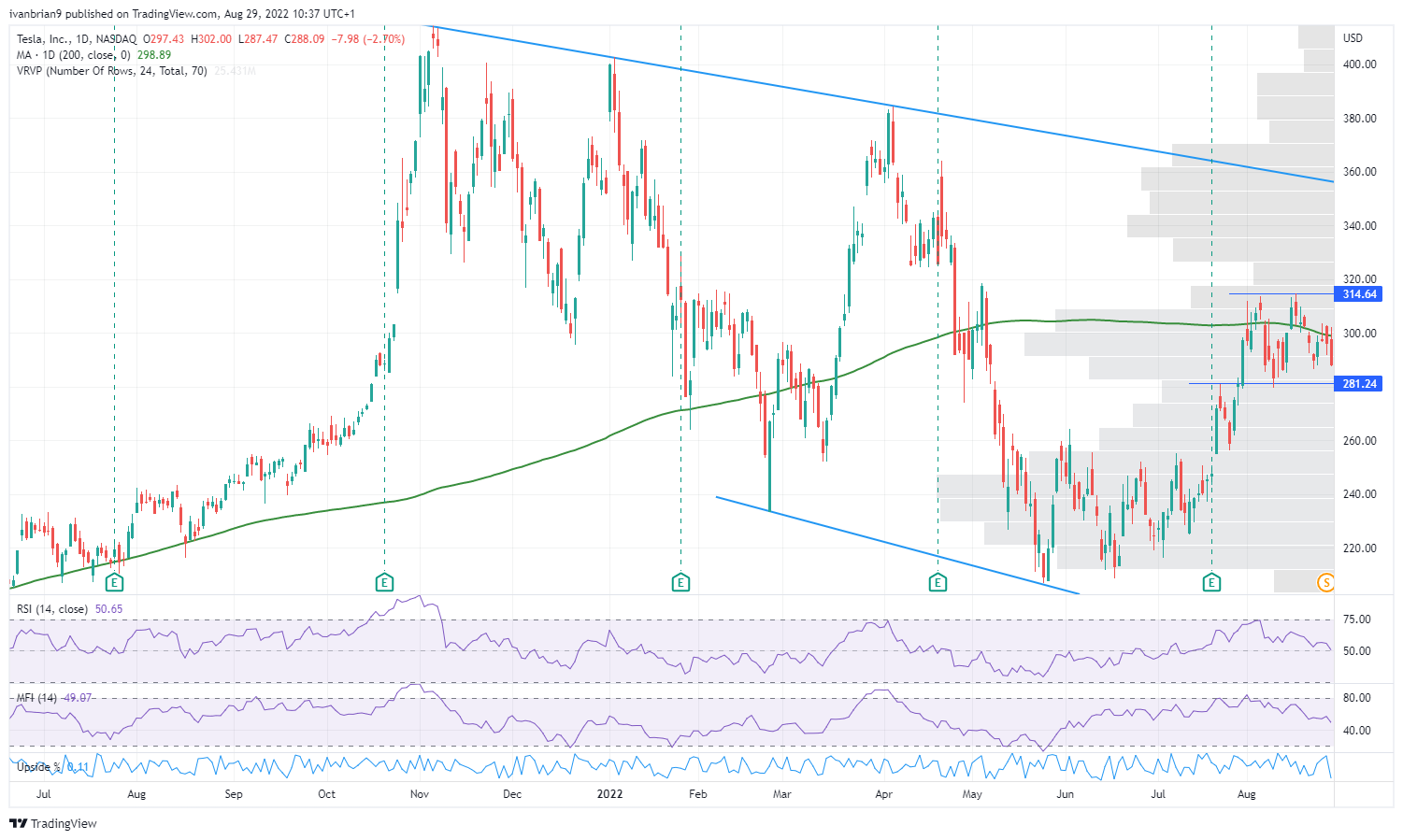 The author is short Tesla.

Update: Tesla Inc finished Monday down 1.14% at $284.82 per share, as stock markets struggled for direction at the beginning of the week. Nevertheless, most global indexes closed in the red as investors struggled to digest the latest news coming from the Jackson Hole Economic Symposium. After US Federal Reserve chief Jerome Powell announced the central bank would keep battling inflation despite the toll rate hikes could take on growth, it was the turn of European policymakers to surprise investors. Some ECB members hinted at more aggressive rate hikes, which lifted odds for a 75 bps rate hike in the Union.

Update: Tesla stock is underperforming the Nasdaq to start the week. While the growth-focused index is down 0.23% one hour into Monday’s session, Tesla shares are off 0.8% at $285.79. Tesla’s 3-for-1 stock split does not seem to be working. The EV stock outperformed the Nasdaq on Friday, but that same verve does not appear to be making an appearance on Monday morning. Shares have traded as low as $281.70 and as high ast $287.74 in the session. Volume appears slightly above average so far.