The highlights this week: Old allies of Venezuela’s government criticize its autocracy, Bolivia offers reparations to victims of its Cold War-era military dictatorships, and a prosecutor files explosive charges against Argentina’s vice president.

If you would like to receive Latin America Brief in your inbox every Friday, please sign up here.

Public comments this week from two of Latin America’s most prominent left-wing politicians suggest changes are afoot in how they plan to approach the Venezuelan government’s democratic backsliding—the core issue behind the political, economic, and humanitarian crisis that has prompted over 6 million people to flee the country since around 2014.

Those earlier comments were part of a long pattern. Over the past decade, whenever Chávez or Maduro faced international criticism for jailing dissidents, obstructing elections, and other undemocratic activities, they often pointed to support from Latin American leftists as signs of their legitimacy. (The Socialists took for granted that right-wing leaders, such as former Colombian President Iván Duque and Brazilian President Jair Bolsonaro, would oppose their political project.)

But this week, both Petro and Lula struck a different chord. Petro, who took office in early August and has begun to restore diplomatic relations with Venezuela that were severed under Duque, said that he would not comply with a request by a top Venezuelan official for Bogotá to extradite Venezuelan opposition activists sheltering on Colombian soil. “Colombia guarantees the right to refuge and asylum,” Petro tweeted on Tuesday. Months earlier, while campaigning, he called Maduro a “very conservative member of the most regressive factions in global politics.”

Lula, for his part, told a press conference Monday that he supports free elections in Venezuela so that it can see “the alteration of power.” What may seem like a banal statement made headlines in Brazil due to his party’s stance in the past.

Before he can act on such sentiments, Lula still faces a challenging election in October. But his and Petro’s comments suggest a possibility that these two highly symbolic former allies of the Venezuelan regime could become more active in ongoing efforts to compel Maduro toward democratic behavior.

Those efforts are currently slow-moving. Maduro pulled out of Norway-facilitated, Mexico-hosted talks with the Venezuelan opposition last November after his alleged financial fixer was extradited to the United States. If and when negotiations recommence, the opposition—which has consulted closely with the U.S. government—aims to extract commitments from Maduro on the conditions for Venezuela’s 2024 presidential elections. Those could include guarantees that opposition candidates are allowed to run and that international observers have free access to enter the country to inspect polling places. Should he comply, Maduro could be rewarded with some degree of relief from U.S. and other international sanctions.

But sanctions relief may not seem worth it for Maduro. In part thanks to financial support from countries such as Russia, Iran, and China, he has survived for years amid a devastating economic crash and recently allowed partial, de facto dollarization in Venezuela—which has caused a very slight recovery.

Pressure from erstwhile allies, however, could influence Maduro—especially if it grows stronger.

On a practical level, Petro’s moves to restore diplomatic relations, and thus consular services, with Venezuela are a small step forward in eventually ensuring Venezuelans abroad have the right to vote absentee in Venezuelan elections. While Petro has not spoken openly about plans involving voting from abroad, such a measure is frequently cited by Venezuelan civil society groups as an important part of restoring democracy in their country.

Reports published this month by both the Global Observatory of Communication and Democracy, a Venezuelan nongovernmental organization, and Chatham House recommend such overseas voting. The latter report, which was based on a dialogue between Venezuelans and diplomats from the United States, European Union, and Canada, concluded that international coordination was “essential” for making progress in Venezuela.

So far, Petro has framed Colombia’s reengagement with Venezuela not around electoral conditions but around pragmatic matters such as restoring business ties between the two countries and improving security in their shared border area. Those alone are huge challenges—so much so that “it seems improbable” that Petro will want to add to them by taking a position on Venezuela’s political crisis, the International Crisis Group’s Mariano de Alba tweeted last week.

But “as circumstances may call for it,” he said, “Colombia could join a body like the International Contact Group [on Venezuela],” a grouping of countries that supports talks toward “credible” elections.

Wednesday, Sept. 7: Brazil marks 200 years of independence from Portugal. Bolsonaro has called for his supporters to rally at a Rio de Janeiro military parade.

Bolivian reparations. Last Sunday, Bolivian President Luis Arce signed an agreement that will compensate some 1,700 victims of the country’s military dictatorships that were in power between 1964 and 1982.

Though less deadly in scale than the Cold War-era military regimes in other parts of Latin America, Bolivia’s military rule still led to the forced disappearances of at least 150 people. Other victims survived torture and arbitrary arrests, Arce acknowledged in a speech.

The new announcement is the culmination of over a decade of advocacy by victims and their family members, including some who staged a yearslong live-in protest in a hut in front of Bolivia’s justice ministry in La Paz. The oldest participants in the live-in protest were approaching age 100 by this year, the Guardian reported in March. The activists took down the hut after Sunday’s announcement.

Página Siete reported that the agreement also grants victims a dedicated meeting space in the capital. There, they plan to press ahead with their next target: full investigation of crimes committed during the military years. 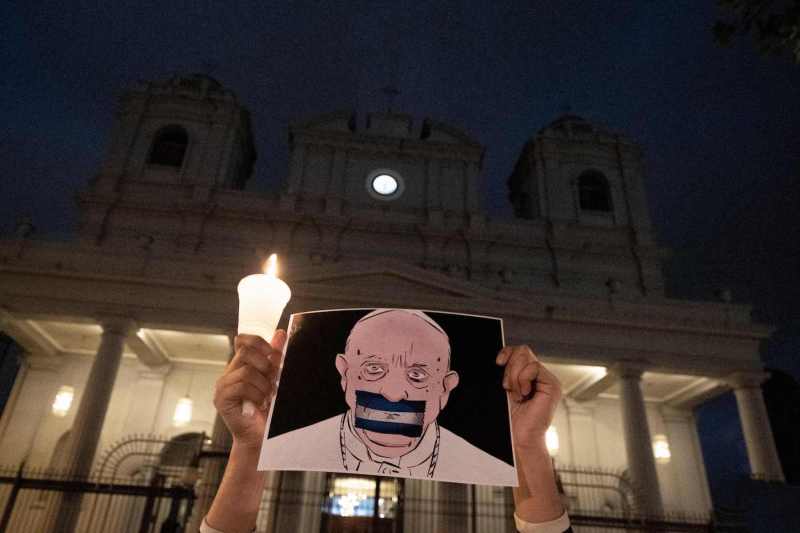 Nicaraguan citizens hold a demonstration in front of San José’s Cathedral to protest against the Nicaraguan government and its detention of Nicaraguan bishop and regime critic Rolando Álvarez in San José, Costa Rica, on Aug. 19.

Nicaraguan citizens hold a demonstration in front of San José’s Cathedral to protest against the Nicaraguan government and its detention of Nicaraguan bishop and regime critic Rolando Álvarez in San José, Costa Rica, on Aug. 19.EZEQUIEL BECERRA/AFP via Getty Images

The pope speaks up. Pope Francis has finally broken his silence about political repression in Nicaragua under President Daniel Ortega. His comments appeared to be in response to the government’s detention of Bishop Rolando Álvarez, who used his pulpit to criticize the Ortega regime’s human rights violations.

Because Ortega and his wife, Rosario Murillo—who is also vice president—both identify as Catholic, Catholic activists have long called on Francis to intervene in the country. In 2018, a papal envoy to Nicaragua—though not the pope himself—appealed for peace following the regime’s crackdown on demonstrators and media, and went on to help mediate talks between the government and the opposition. In March of this year, however, the government expelled Francis’s envoy.

While the pope finally spoke out personally last Sunday, he stopped short of directly condemning Ortega, simply calling for an “open and sincere dialogue” in the country and voicing “worry and pain” over recent events there.

New political slang. Adding to the robust repertoire of Brazilian Portuguese insults, a Bolsonaro critic coined a new term last week that quickly caught on across the country. “Tchutchuca do Centrão”—which The New York Times translates roughly as “the pork-barrelers’ little lap dog”—has since even been projected on the side of a building by Bolsonaro critics.

“Tchutchuca” is thought to be an Angolan-Indigenous Brazilian Tupi word for submission that was popularized when it was used in a lyric in Brazilian funk music in 2001. The phrase accurately accuses Bolsonaro of bending to the will of a conservative bloc of establishment lawmakers known as the “Centrão,” or big center, whom he pledged to scorn when he first came to office.

It’s not the first time that “tchutchuca”—which has alternatively been translated as “pussy-wussy” by Flora Thomson-DeVeaux—has been lifted from funk to apply to politics in recent years. In 2019, a left-wing congressman flung it at Bolsonaro’s finance minister, Paulo Guedes, saying, “You’re a tiger when it comes to cutting benefits for retired people, the elderly, and people with special needs,” but “a pussy-wussy—tchutchuca—when it comes to touching the rich.”

Question of the Week

Brazilian funk music was created in the 1980s, when tapes of Miami bass music were brought to Rio de Janeiro and local MCs started rapping over them. Who of the following is not a Brazilian funk artist?

Joãozinho Trinta was an iconic designer of Brazilian carnival floats in the 1970s through 2000s. He was also a dancer, but his preferred genre of music is not funk, but samba.

In Focus: Lawfare Allegations in Argentina 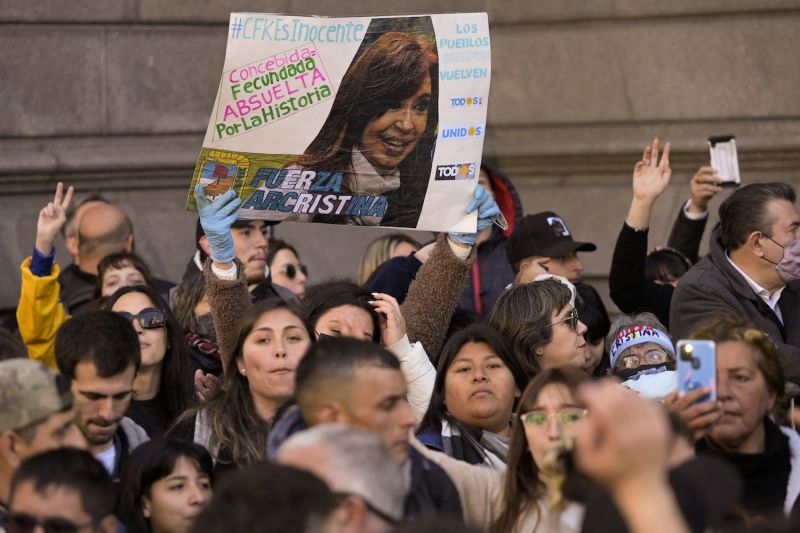 On Monday, an Argentine prosecutor slapped a politically explosive indictment on Argentine Vice President Cristina Fernández de Kirchner. He called for her to serve 12 years in prison for corruption related to diverting money from public contracts during her 2007 to 2015 presidency, charges she denies.

The case against Fernández de Kirchner is likely to hang over her at least until next year’s presidential elections, when she might run again. In the past, she has been investigated on charges of money laundering and fraud but has been cleared on most counts; some are still moving through the courts.

Fernández de Kirchner’s situation has some parallels to that of Brazil’s Lula four years ago. The former Brazilian president faced a sprawling anti-corruption probe that resulted in his jailing in 2018, though his sentence was overturned last year on procedural grounds.

During and after his trial, Lula claimed he was targeted for his politics—an assertion that won over his most hardcore fans but turned off other former supporters. Some of them ended up decamping to other political movements, even that of Bolsonaro. In Argentina, both the center right and even the far-right are waiting in the wings for such potential strayers from the Peronists.

Left-wing leaders elsewhere in the region—including the presidents of Mexico, Bolivia, and Colombia—condemned the charges against Fernández de Kirchner. The new Americas director of Human Rights Watch, meanwhile, criticized Fernández’s comments, saying he should let Fernández de Kirchner defend herself.

As the Peronists try to stay in power past next year, campaigning on claims of being politically targeted could be a tempting strategy to distract from Argentina’s economic problems. Still, Brazil’s experience in 2018 shows that a heavy focus on the political persecution narrative—even if it holds water—may not be enough to win an election.