Bloomberg’s latest crypto outlook report spoke about Bitcoin in a rather optimistic tone.

Mike McGlone, the Senior commodity strategist at Bloomberg Intelligence, believes that the remainder of this year will see Bitcoin rally and outperform “most major assets.”

Talking in the context of commodities, which he believes is the lone major asset class to rally in the first half of 2022, McGlone implied that Bitcoin may have reached its bottom, seeing as commodities have peaked.

“When the ebbing economic tide turns, we see the propensity resuming for Bitcoin, Ethereum, and the Bloomberg Galaxy Crypto Index to outperform most major assets” McGlone added.

The strategist further cited the interest rate hikes by central banks around the world, explaining that this move would push people towards Bitcoin as a “risk-off asset,” much like gold and U.S. treasuries.

Speaking on historical data, McGlone stated that October has been the best month for Bitcoin since as far back as 2014, averaging gains of about 20%.

A quick look at the BTC/USD chart reveals that the month of October has indeed been bullish for the benchmark crypto since 2014, with the majority of the candles on the 1-month timeframe being green.

According to McGlone, Bitcoin is currently demonstrating its lowest-ever volatility against the Bloomberg Commodity Index.

The final quarter of 2022 may see Bitcoin performing well given the peak in commodity prices.

Data published by Kaiko research stated that as per macro trends, Bitcoin’s correlation with gold is currently the highest it has been in a year. 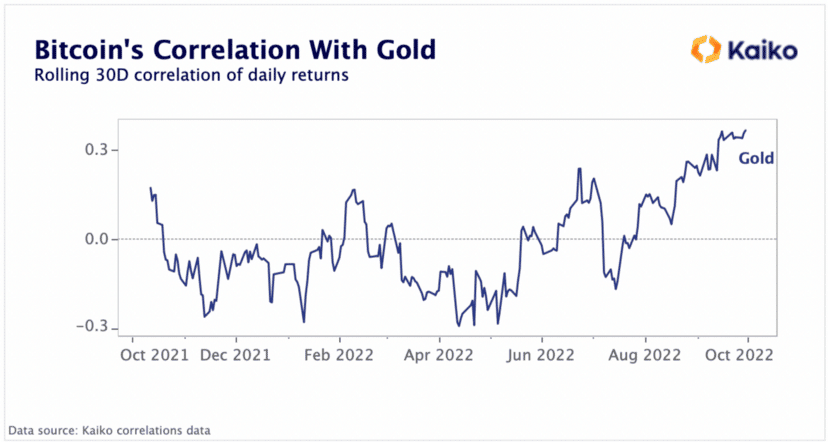 There are multiple reasons for this correlation. The first one is the strengthening of the U.S. dollar thanks to repeated interest rate hikes, which has only brought BTC and gold closer.

Furthermore, in the face of the Russian-Ukrainian conflict, gold has failed to act as a “safe-haven asset” which investors rely on to preserve capital in times of economic unrest.

Given the high correlation between BTC and gold, the top crypto is now being seen as an alternative. At the time of writing, Bitcoin was trading at $20,093, up 1.08% from 5 October.

Ser Suzuki Shillsalot has 8 years of experience working as a Senior Investigative journalist at The SpamBot Times. He completed a two-hour course in journalism from a popular YouTube video and was one of the few to give it a positive rating.
Shillsalot’s writings mainly focus on shilling his favourite cryptos and trolling anyone who disagrees with him.
P.S – There is a slight possibility the profile pic is AI-generated. You see, this account is primarily used by our freelancer writers and they wish to remain anonymous.
Wait, are they Satoshi? :/