If you would like to receive Africa Brief in your inbox every Wednesday, please sign up here.

How Can the Central African Republic Find Peace?

Last week, long-promised peace talks in the Central African Republic ended without progress. Rebel groups were not invited, and opposition parties boycotted the so-called national dialogue for reconciliation, held in the capital of Bangui.

Following his controversial reelection in December 2020—less than a third of the electorate was able to vote because rebel groups controlled large chunks of the country—President Faustin-Archange Touadéra promised to hold talks.

But opposition groups saw the forum as an attempt to placate the international community amid United Nations sanctions. At the dialogue, civil society groups denounced discussions on amending the constitution to allow Touadéra to run for a third term. That proposal was later withdrawn.

However, analysts fear that the possibility of real change is fading as Touadéra’s administration becomes increasingly autocratic, a situation complicated by the deployment of mercenaries from the Russian private security firm Wagner Group and Rwandan troops who helped wrest back key cities from the grip of armed rebels.

From the outset, CAR’s government hoped to defeat the rebels using Wagner mercenaries and without negotiation, said Hans De Marie Heungoup, a senior analyst for Central Africa at the International Crisis Group. Instead of exile, rebels want an agreement allowing them to stay in CAR and not be prosecuted for war crimes, a deal the government views as untenable.

Russian deployment. Britain’s Defence Ministry announced last week that Russia had been forced to withdraw mercenaries from operations in Africa and Syria. Although the situation may change, there is no evidence on the ground, observers told me, that those withdrawals were from CAR.

Nevertheless, rebels seem to think it might help them. “Some [armed groups] currently think that the fight between Russia and Ukraine may distract Russian Wagner forces and allow them to come back in the country or it may push Western countries such as France to support them in order to fight against Wagner,” Heungoup said.

Power struggles. The conflict started in 2013, when the predominantly Muslim Seleka rebels overthrew the brutal regime of François Bozizé, who had seized power in a 2003 coup. Encouraged by Bozizé, mainly Christian anti-balaka militias fought back and started targeting Muslims. A Russia-brokered peace deal with 14 armed groups was signed in 2019, allowing militias into the government and federal army, but violence erupted after Bozizé returned from exile and was barred from running in the 2020 elections.

Touadéra has accused Bozizé of inciting the new cycle of violence under an alliance of rebels, called the Coalition of Patriots for Change, who have stepped up guerrilla tactics even with 15,000 U.N. peacekeepers deployed in the country for nearly a decade—a fact that Touadéra weaponizes. “It’s part of the narrative that the president uses to say, ‘What are those guys doing there? That’s why I brought Russia in, because they are the ones that can fight,’” Heungoup said.

Murky arrangements. Moscow maintains that it sent unarmed military trainers and weapons to CAR in return for mineral concessions, part of a 2017 deal inked with Bangui. U.N. experts say those so-called trainers are 2,000 armed mercenaries from the Wagner Group, whose existence Moscow denies because private military contractors are illegal in Russia. Russian fighters have a similar foothold in Mali, Libya, Mozambique and Sudan.

Offensives have seen gross human rights violations—including extrajudicial killings, rape, looting, and torture—committed on all sides, including by Wagner operatives, U.N. troops, and the federal Central African Armed Forces. The conflict has left thousands of people dead and sent 737,000 fleeing mainly into the neighboring Democratic Republic of the Congo.

Ordinary citizens seemingly welcome Moscow’s intervention, because without Wagner assistance, Bozizé would have seized control. “Touadéra’s administration, although it is corrupt, is an administration which has been democratically elected,” Heungoup said.

Heightened turmoil. More than half of CAR’s state budget comes from the World Bank and European Union, which could suspend support over the use of mercenaries. Residents have pragmatic concerns about rising Russian abuses, weakening governance, and economic development. Put simply, Central Africans want peace.

International reengagement could ease hostilities. This could be through an increase in Rwandan troops, who are also fighting terrorists in Mozambique. As John A. Lechner and Alexandra Lamarche noted in Foreign Policy last year, “half-funded programs, and half-hearted reforms will only result in half-baked solutions that lead to more instability.” Touadéra will therefore need to initiate meaningful engagement among warring parties if CAR is to achieve a long-term solution.

African leaders commemorate the 1994 Rwandan genocide at an event organized by the African Union in Addis Ababa, Ethiopia.

The U.N. Security Council meets for a briefing on the U.N. mission in Mali.

Nigeria blocks 75 million phone lines. The Nigerian government ordered networks to disconnect outgoing calls from SIM cards not registered to a national identity number, affecting some 75 million phone lines, in a bid to curb rising incidents of kidnappings for extortion. The rule came into effect on Monday, the Nigerian Communications Commission said in a statement.

Approximately 168 people are missing after gunmen attacked a train with explosives, according to the Nigerian Railway Corp. The train had been carrying 362 passengers from the capital of Abuja to the northern city of Kaduna. The attack on March 28 is the latest violent assault blamed on armed gangs, now classified as terrorists. At least eight people were killed. Government critics say the measures do not go far enough in tackling insecurity in parts of the country.

South Sudan unifies army. South Sudan’s political rivals signed an agreement on Sunday to create a unified armed forces command, a deal that may curb a new outbreak of fighting in the country.

In recent days, there were clashes between forces controlled by President Salva Kiir and those supporting Vice President Riek Machar, who had accused the president of violating the 2018 peace agreement that ended civil war in the country. The new deal joins both forces, with Kiir’s faction allocated a 60 percent representation in key security forces positions. Machar and other opposition groups will occupy the remaining 40 percent.

Kenyatta considered the measures necessary to promote power-sharing within Kenya’s political ranks. But critics said it would strengthen Kenyatta’s inner circle ahead of parliamentary elections in August. Among the amendments was the introduction of an extra 70 seats in parliament, which critics viewed as an attempt to reward those loyal to Kenyatta with inflated positions.

Kenyatta has served two terms as president and cannot stand in upcoming polls. There was one significant win for Kenyatta, as the court ruled the president has legal immunity, overturning a lower court judgment that he had acted illegally in introducing the amendments and could be sued. 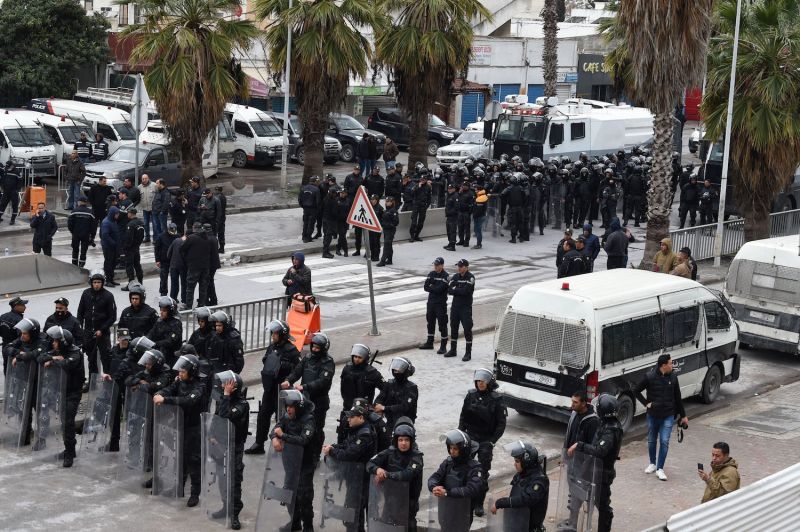 Tunisian security forces stand guard during a protest against the country’s president, not far from the parliament building, in the capital of Tunis on March 20.FETHI BELAID/AFP via Getty Images

Saied dissolves parliament. Eight months after suspending parliament, Tunisian President Kais Saied has dissolved the body. His actions came after parliament held a virtual session and voted to repeal the “exceptional measures” that Saied used to assume autocratic rule since July 2021. Saied viewed the move by lawmakers as in breach of their suspension and accused parliamentarians of “coup attempts.” Observers view Tunisia’s eroding democracy as a symbolic end to the 2011 Arab Spring revolution.

Meanwhile, data visualization by the Tunisian outlet Inkyfada found that impunity for law enforcement officials has persisted since 2011, including physical, moral, and sexual violence. Civilian complaints have been filed against Tunisian police for human rights violations and use of torture without those responsible being held accountable.

This Week in Tech and Culture

Kenya’s undersea fiber optics. Work has started in Kenya on a $425 million data expressway connecting China to Europe and Africa. Huawei is a shareholder in Hengtong Optic-Electric, the company building the cable as part of Beijing’s Digital Silk Road initiative. Washington had sought to apply diplomatic pressure in preventing Huawei from supplying the world’s digital infrastructure over concerns of possible espionage by the Chinese government, but Beijing continues to make gains.

Without U.S. policymakers providing cheaper alternatives, Beijing is winning global influence. As Amy Mackinnon examined in Foreign Policy, Huawei has built about 70 percent of Africa’s 4G networks. The new 9,320-mile project, called the PEACE (Pakistan & East Africa Connecting Europe) Cable, will travel over land from China to Pakistan and then undersea for about 7,500 miles, passing through Kenya, Somalia, Djibouti, Egypt, Malta, and Cyprus before terminating in France. It will help Kenya meet future broadband requirements.

U.S. returns Libya artifacts. The United States on Thursday returned two ancient artifacts smuggled out of Libya. U.S. officials said the stone funerary heads valued at more than $500,000 date back to the fourth century and were pillaged from tombs in the ancient city of Cyrene, now present-day Shahhat, Libya. One was previously on display at the Metropolitan Museum of Art in New York City.

Since the ousting of longtime dictator Muammar al-Qaddafi in 2011, Libya has struggled to protect prized antiquities from being funneled out of the country. In January, U.S. authorities returned a Libyan marble head valued at $1.2 million.

Chart of the Week

The conflict in the Central African Republic has seen widespread human rights abuses amid a heavy foreign military presence. Yet there has been little progress on dialogue seeking to end the violence.

Russian bid for South African energy contract. The South African investigative platform AmaBhungane considers the political risks for the country after Gazprombank, owned by Russia’s state gas supplier Gazprom, confirmed it will likely bid for a tender released last month to help South Africa secure natural gas for the next five years. As European countries continue to buy Russian gas, Gazprom is one of the few Russian state-owned companies to escape harsh sanctions.

Nigeria’s creative retreat. In Wallpaper, writer Ijeoma Ndukwe uncovers the off-grid charm of a new artists’ residency space established by British Nigerian artist Yinka Shonibare on farmland in the village of Ikise in southwestern Nigeria. Surrounded by panoramic views, “the hum of insects, rustling grass and birdsong forms the soundtrack to this country retreat,” Ndukwe writes. The program, which launches this spring, offers artists globally the opportunity to live on-site for three months, learn from Nigerian artists, and better understand Nigerian culture.