Skip to content
Home
SECTOR WATCH
Finance
Alberta Budget: Province to post $511M surplus on the back of higher oil and gas prices

A windfall from high oil and gas prices could hand Alberta’s government at least a $511 million surplus, with a budget set to boost operational health spending by $515 million.

The 2022-23 budget presented Thursday could be the province’s first balanced budget since 2014-15, but some projected spending increases, including in health care operating costs and K-12 education, do not keep pace with high inflation and population growth pressures.

With oil prices riding a high, the budget estimates bitumen royalties will hit $10.3 billion in 2022-23, up from just $2 billion first budgeted in 2020-21 when global energy prices tanked amid the COVID-19 pandemic, and $1.4 billion at the same time last year.

Finance Minister Travis Toews told reporters at a Thursday news conference before tabling the budget that the government’s focus is on keeping taxes low, attracting business investment, and reining in government spending. He predicted that this year, Alberta’s economy will fully recover from its 2014 contraction, and for the government to post surpluses in the following two fiscal years.

“We’re focusing on what we can manage — oil prices will go up and down, but we’re looking to create more stability, more sustainability in Alberta’s income statement,” said Toews, who added the UCP government’s spending has been trimmed to within that of comparator provinces.

“Without the flattening of this operating expense curve, we would not be presenting a balanced budget today,” he said.

The government is basing its budget projections on an average West Texas Intermediate (WTI) price per barrel of US$70 in 2022-23, while WTI continued to trade above US$90 a barrel Thursday.

We apologize, but this video has failed to load. 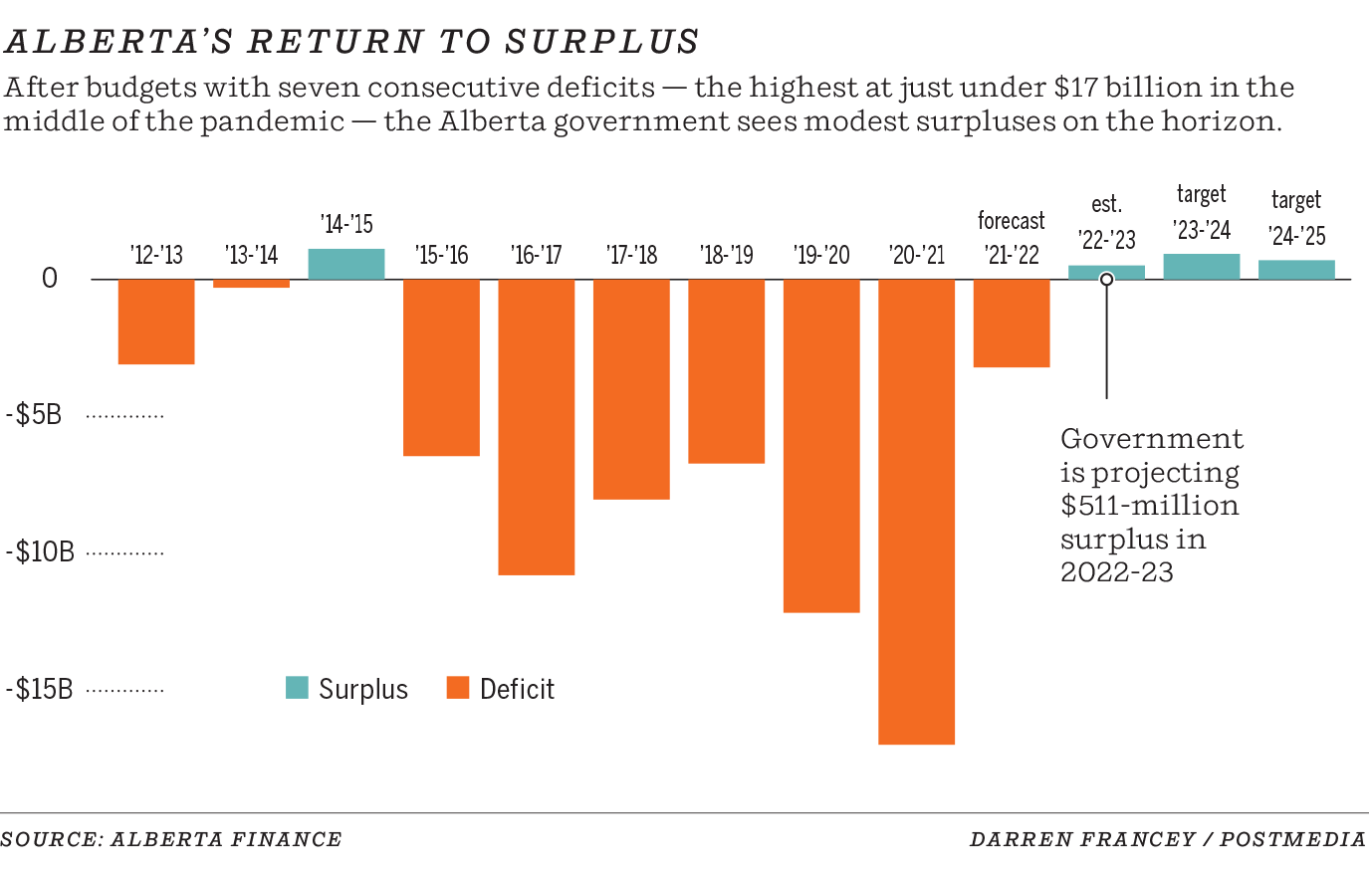 The budget promises to bring a consumer price protection mechanism over six months. If natural gas prices exceed $6.50/gigajoule on a monthly basis, a utilities rebate will be triggered between October and March 2023.

Toews said Thursday if natural gas prices exceed the threshold before October, he would expect the government to move up the October start date.

As rising grocery costs and utility bills squeeze Albertans’ household budgets, the finance minister said the government is working to support them by focusing on economic growth and more jobs.

“The most durable and beneficial thing that governments can do in times of inflation is to spend less, borrow less, and tax less,” said Toews, who added he is confident wages will go up faster and higher than inflation in the next three years, although he acknowledged that many Albertans are not benefiting from a pay raise.

The budget documents forecast inflation to average 3.2 per cent in 2022, the same as last year’s rate, before declining gradually to around 2.2 per cent by the end of the forecast period. In Alberta, inflation spiked to a nearly 15-year high of 4.8 per cent in December.

In 2019 the UCP government decided to pause personal income tax indexation, and with the 2022-23 budget it will remain on pause, meaning the cap for tax-free earnings doesn’t move up with inflation and a bump in wages could push workers into a higher tax bracket.

Resuming the re-indexation of those taxes would cost the government an estimated $200 million. Toews said he would consider it in 2023.

Meanwhile, the province’s workforce is getting a $600-million boost over three years to address labour shortages, much of it aimed at training and retraining. 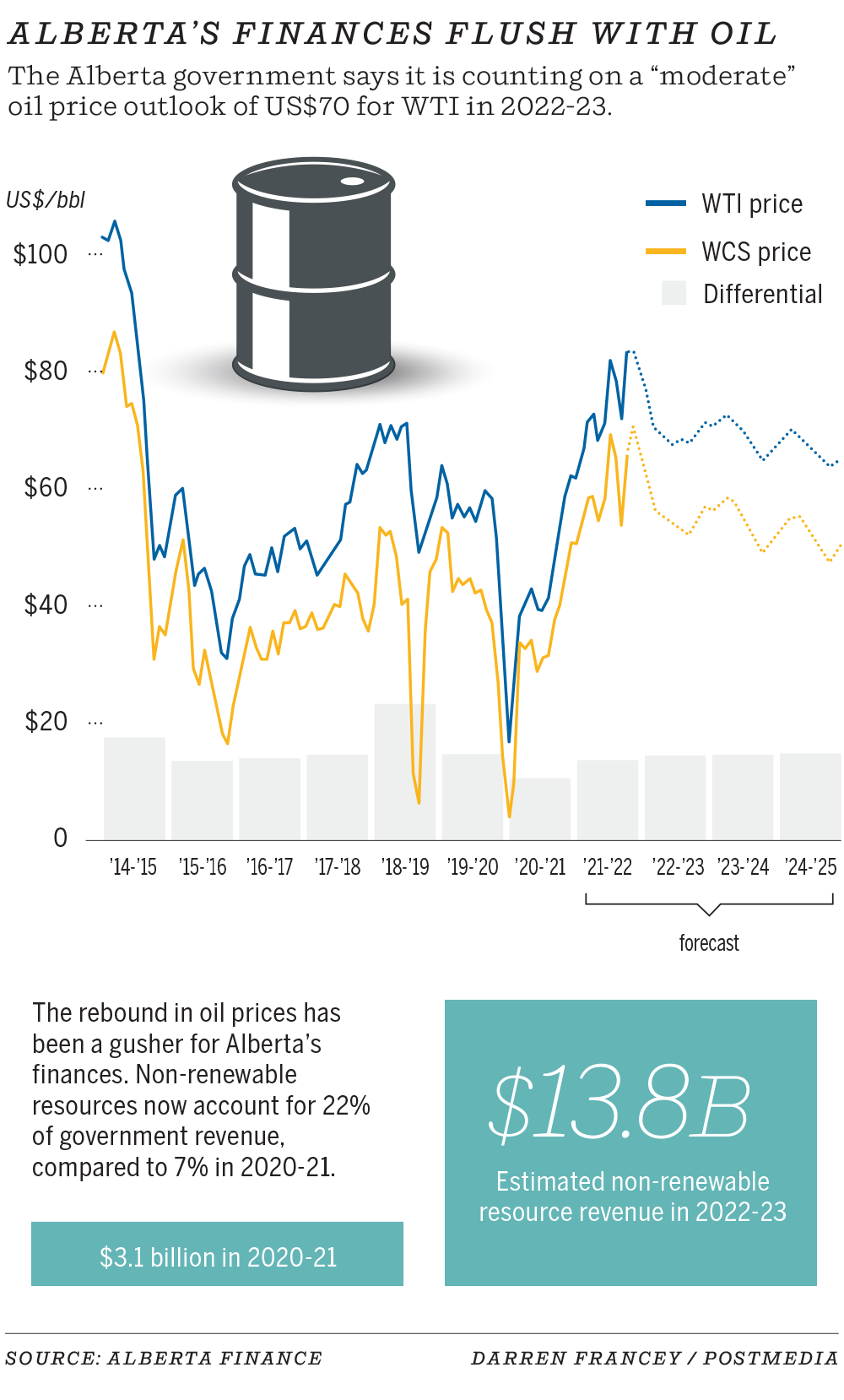 Budget ‘high on oil prices and low on support for families and businesses:’ Notley

NDP Leader Rachel Notley characterized the budget as “high on oil prices and low on support for families and businesses.”

She took aim at the government’s decision to not re-index personal income taxes, AISH and seniors’ benefits, and said the natural gas rebate has a threshold that may never be reached, abandoning Albertans on their own with both natural gas and electricity prices.

“The premier may be celebrating but Alberta families are not back in black,” she said.

Independent MLA Drew Barnes said the budget should have dropped small business taxes to zero, found better savings and efficiencies in government, and meaningfully addressed the effect of inflation.

Health gets a boost

Advocacy groups including the Friends of Medicare and Public Interest Alberta decried the budget’s cuts and the UCP’s plans to invest in privately-delivered health care through its surgical wait time initiative.

Up to $8.4 billion from last year’s $8.3 billion, the operating budget for K-12 schools increases funding by 1.7 per cent, or a total of $142 million in 2022-23. That also includes $627 million in both years of “own-source” or money from school board reserves and one-time federal government funding for COVID-19.

Notley said the relatively flat budget won’t support enrolment growth and will mean “our kids will fall further and further behind in school.”

The budget was given kudos by the Canadian Taxpayers Federation for its restraint but, like Notley, called for the UCP to bring back income tax indexing.

“The government deserves credit for beginning to roll back years of government overspending that has wreaked havoc on our province’s finances,” said Kevin Lacey, Alberta director with the CTF.

The Alberta Federation of Labour, however, slammed the budget as a “missed opportunity,” in a news release.

“While a one-off bump from oil and gas revenues is welcomed, Albertans are not seeing the benefits,” said president Gil McGowan.

Sign up to receive daily headline news from the Edmonton Journal, a division of Postmedia Network Inc.