Filament Health (FH.NEO), a Vancouver, British Columbia-based clinical stage natural psychedelic drug development company, announced today that it had been issued its 8th patent for the extraction and standardization of natural psilocybin and associated psychedelic compounds.

Taran Grey, company director of intellectual property, commented, “Filament’s 100-per-cent pending application to issued patent success rate demonstrates our team’s talent given that the industry average is less than 50 per cent. Before Filament, shelf-stable psilocin was seen as an impossibility. We have created psilocin as a revenue-generating reality, and we continue to lock down the intellectual property to produce it. From multisolvent extraction to purification to controlled dephosphorylation to standardization and delivery methods, I am deeply proud of our research department’s work product, IP and otherwise.”

Back in August 2021, Filament received the first-ever patent for the extraction and standardization of natural psilocybin. Since then, it has received four more from CIPO and three more from the United States Patent and Trademark Office.

Filament released financial results from its Q2 2022 recently, reporting cash and cash equivalents of $3.0 million CAD as of June 30, 2022.

During the same quarter, the company announced it intended to complete a non-brokered private placement for gross proceeds of up to $2.5 million. That PP was closed on July 13, 2022.

Also, during that same three-month period, Filament announced that a patient had been dosed with one of Filament’s drug candidates through the Health Canada Special Access Program.

At the end of July, the company announced its participation in Project Solace, purportedly the world’s largest medical psilocybin access and date project.

Project Solace is led by TheraPsil in collaboration with Drug Science. The primary objective for the program is to expand legal access to psilocybin for Canadian patients suffering from end-of-life distress and other serious conditions for which traditional treatment options have failed.

The secondary objective is to develop a body of evidence using a real-world data registry to document clinical effectiveness, safety, and clinician- and patient-reported outcomes from psilocybin-assisted psychotherapy through Canada’s Special Access Program or under exemptions allowing for the possession of psilocybin.

Equity.Guru’s own technical trading analyst Vishal Toora, took a look at Filament and the psychedelics sector in general back in May and mentioned he felt that even the sector was getting hammered and didn’t seem to be out of the woods yet, he was of the mind that, “Filament Health actually is showing signs of a confirmed bottom. The markets see $0.10 as the floor. We tested this in late February 2022 with buyers stepping in at $0.10 as evident by the wick. Note the price action from March 28th 2022- April 12th 2022. A range with $0.10 as the floor and $0.12 at the top. We respected the $0.10 level again, and the range saw a beautiful breakout.”

Filament remained above the $0.10 floor since, hitting $0.15 in the beginning of June, but unfortunately has slipped in the last seven days to sit at $0.08 per share. Is this the new floor?

We sat around our Equity.Guru Investor Roundtable and discussed the state of Filament Health in the middle of May: 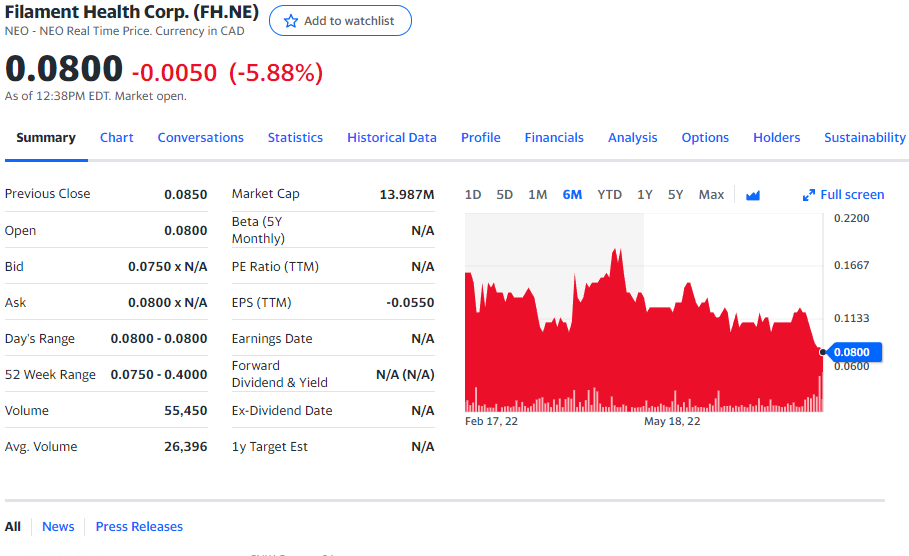