At the beginning of April, Plurilock announced that it had signed a non-binding letter of intent to acquire all net assets from a regional USA-based IT & cybersecurity company.

Later that month, the company reported that ASC had received a purchase order from a California-based pension fund for Plurilock’s DEFEND zero trust identity confirmation solution. This was the first cross-selling purchase order through Aurora.

In the middle of May, Plurilock announced the release of DEFEND for Amazon Workplaces available through Amazon Web Services.

Also, during Q2, the company announced $3.65 million USD in new orders and contracts which included $1.41 million and $2.01 million orders with multiple U.S. government agencies such as the U.S. Department of Defense, U.S. Department of Energy, U.S. Library of Congress, and as part of the National Aeronautics and Space Administration’s Solution for Enterprise-Wide Procurement program.

Since the end of Q2, Plurilock announced the signing of a definitive agreement for the asset acquisition announced in April with Atrion Communications, a leading provider of consulting, professional services and technology solutions.

The deal is a cash and stock transaction payable in three parts: $2.0 million cash on closing, $500,000 cash payable 90 days following closing and 1.29 million common shares of Plurilock issued on closing as well as 1.29 million common shares issued one year from closing at $0.30 CAD per share. All shares issued in the transaction are subject to a customary four-month hold period from closing.

Ian L. Paterson, CEO of Plurilock, commented on the company’s financial report, “The second quarter of fiscal 2022 saw Plurilock reaching new milestones which includes releasing new advanced product features, adding a seasoned director, receiving international recognition for its technology and sales efforts and most notably, securing its first cross-sale order for its high-margin proprietary software with a California-based pension fund. Furthermore, we continued to expand our active sales pipeline by securing new purchase orders, which led us to generate a total revenue of $9.1 million for the three-month period.” 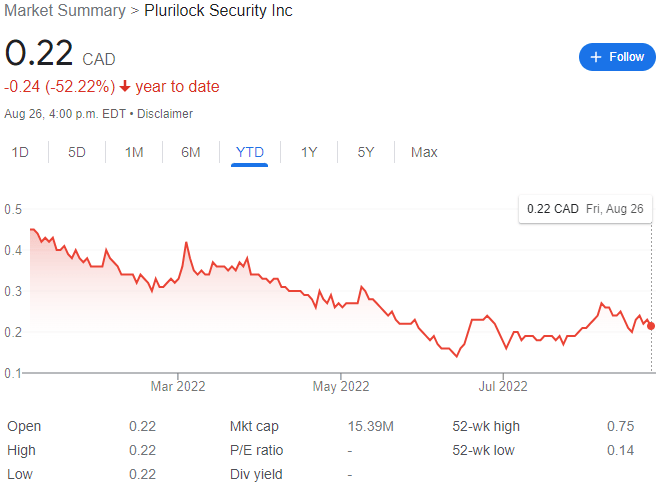