Prismo Metals (PRIZ.C), a Canadian mineral explorer focused on the acquisition and development of high-grade silver and gold projects in the Americas, announced today that it had closed its recent non-brokered private placement, issuing 750,000 common shares at a price of $0.20 CAD per share for gross proceeds of $150,000.

As a result of the offering, the company now has a total 29.23 million common shares issued and outstanding.

All securities issued in the offering are subject to a customary hold period of four months and one day from the date of issuance.

Recently, Prismo announced that it had commence drilling at the Palos Verdes Project located in the southern part of the State of Sinaloa in northwestern Mexico approximately 65 kilometres northeast of Mazatlan, Sinaloa.

The announced drill program is for 2,000 metres total depth and is a follow up to previous shallow drilling which intersected high grade mineralization with results including 2,336 g/t Ag and 3.75 g/t Au over 2.3 metres.

In other news, the company announced back at the end of July that it had begun trading on the OTCQB Venture Market under the symbol PMOMF.

Chris Parry, founder of Equity.Guru, sat down recently to give his thoughts on Prismo Metals and the potential it holds for investors. 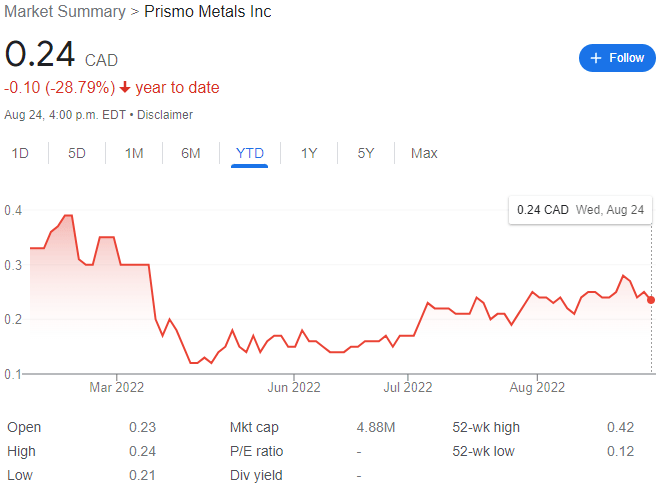