The battle between expected future demand and price of uranium continues.

There is one thing we need to understand about the uranium market in order to be able to forecast potential or trouble. It’s called the nuclear fuel cycle. 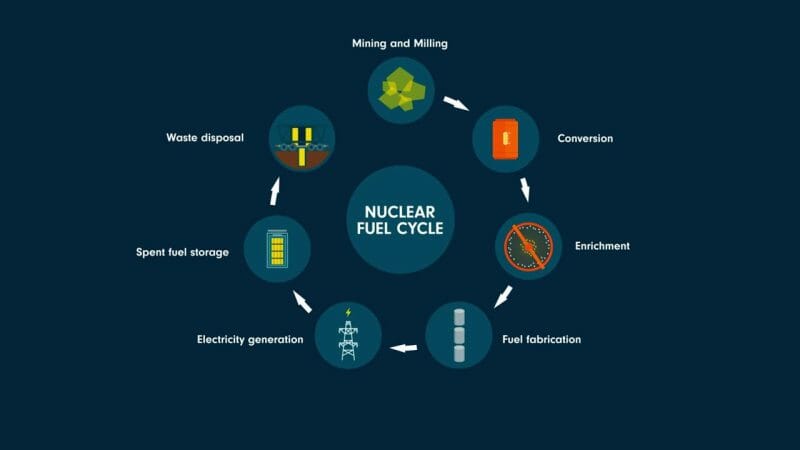 The nuclear fuel cycle is the order in which fuel is processed and sold so nuclear power plants can keep on generating the electricity we need to maintain our lifestyles around the world. Contrary to popular belief, we cannot mine uranium from the ground and simply use it as-is to generate power. It rather needs to go through a very long 18- to 24-month process to gain the appropriate concentration and state. Nuclear reactors use fuel rods that look like nothing you’d see in and around a mine. Let’s understand how this process holds the key to understanding what may come next in this commodity.

There are two ways of mining uranium. The traditional way is to mine the rock, then run the ore through a mill, which will produce what we call U3O8, aka yellow cake. Another, lower cost process is called ISR, where miners pump a solution with bicarbonate of sodium (yes, the stuff you make cakes and biscuits with), and out comes a mineral-rich solution that goes through a processing plant, getting to the same end: U3O8/yellow cake.

The drums of yellow cake are then transported to another processing facility, which usually belongs to a completely different company, and converted into a gas called uranium hexa-fluoride, or UF6. This process is called conversion.

Next, we take the UF6 and enrich it, which is to make it more concentrated. Enrichment facilities are few and far between quite literally, with some capacity in North America and Europe. Enriched uranium is then sent to a fabrication plant where they become pellets about the size of a gummy bear. These pellets are part of the fuel rods that finally, are reactor ready.

Transporting and processing potentially radioactive, special material such as uranium is a logistical nightmare, so nothing in this industry happens fast and everything must be planned and contracted years in advance.

Great, but how does that affect our investing decision and why isn’t the price of uranium exploding right now?

First, if you’re a fuel buyer at a utility company, your focus is on getting the fuel plant-ready within a certain price range, but most importantly, you need certainty that the goods will be delivered. Security comes first, price second because there is no substitute for nuclear fuel. If you have the chance to purchase enriched uranium, you will, because that’s close enough to being ready for usage that you can cut down delivery time immensely. Failing that, you go to converted uranium at the very least, as you make your way back into the supply chain all the way to yellow cake.

And what’s happening to the price at the other end of the nuclear fuel cycle, with enriched and converted uranium? I thought you’d never ask! 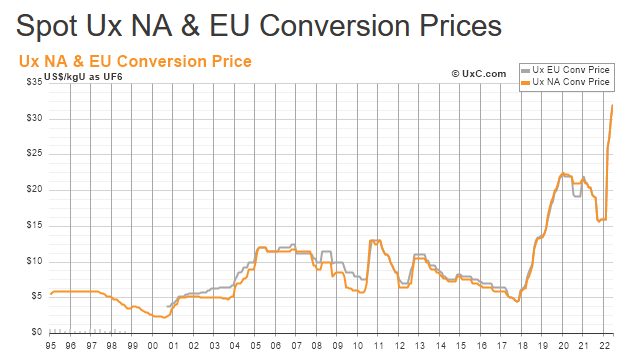 At the end of July, UXC published a new all-time high for conversion and SWU (the cost of enriching) is keeping a high level of over $159 USD per kilo. Demand is higher than ever, and the price is showing it. Rumor has it that supply of UF6 is actually running out and Honeywell is planning on re-opening the only American facility that it had, after shutting it down in 2017 due to market conditions, i.e. demand wasn’t there. (https://www.powermag.com/honeywell-to-reopen-sole-u-s-uranium-conversion-plant/)

Higher demand for converted, enriched and fabricated material means more demand for uranium down the road as enriching facilities switch from underfeeding to overfeeding. But what does that mean?

Imagine that instead of uranium, we produce orange juice. Your factory is going through a slow season, cand you need to produce half as much as the usual. What can you do to maximize efficiency? You can take the oranges and give them an extra squeeze and get the same amount of juice, but with less oranges as your input, because you have time and capacity. The same happens with enrichers, when periods are slow and there are a lot of stockpiles, which happened post-Fukushima, they can keep “squeezing” the uranium, driving any marginal demand for U3O8 down in an already depressed market.

On the other hand, compared to the long bear market we’ve come out of, once demand for the enriched and converted goods is high, more uranium is needed to produce the same amount of output, since they no longer have the time and capacity to give the orange, or uranium, another squeeze. It’s calculated that approximately 20-30 million pounds that were being dumped into the market from this secondary supply are not only not going to be produced, but a similar amount has become demand for uranium in order to increase output.

Throw in the mix a widely known fact that up to 40% of the world’s enriched uranium goes through Russia for that very process, and you have an already tense supply chain dynamic making its way up to the raw material.

If you know that historically, uranium stocks have done extremely poorly in July and August, and extremely well in the fall, you have a waiting game that’s incredible to watch. I will leave you with one last thought by a man who’s been an investing legend and inspiration to me, Jim Rogers. It goes: “I just wait until there is money lying in the corner, and all I have to do is go over there and pick it up. I do nothing in the meantime.”